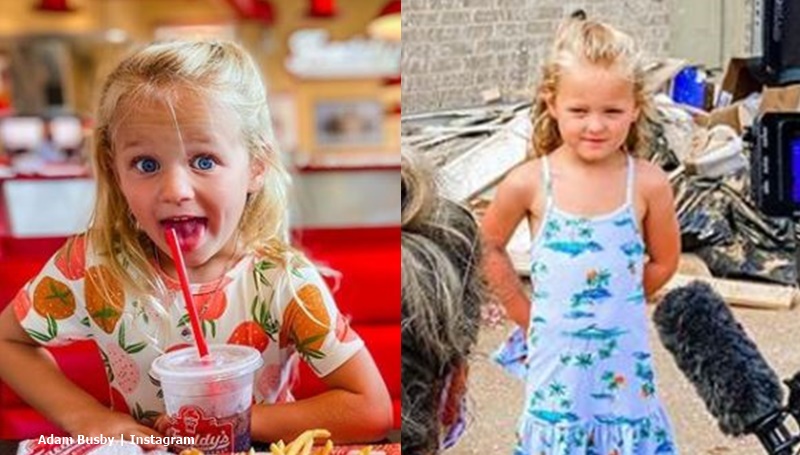 OutDaughtered dad Adam Busby looked a bit down when the kids returned to in-person school this week. But, at least he sees the kids in the afternoons. It looked like the moment they got home, they went outside and played in the yard. Now, Adam shared a really nice photo of Olivia and Riley. Fans agreed they looked super-cute.

Adam Busby took to his Instagram and shared his photo of the two girls in their kids’ dune buggy. He captioned it with, “Mobbin’ out back!.” Usefully, in the hashtags, he mentioned Olivia and Riley. Many fans simply can’t tell Olivia and her sister Ava apart. Some fans commented on the dune buggy and one noted that it looks nicer than their own car.

Other OutDaughtered fans teased the girls about not speeding in the yard. Meanwhile, lots of people love the Busby’s yard. It’s big, got lots of green lawn, and the palm trees make it look tropical. Actually, some time back, Adam shared in his Instagram stories about getting in palm trees. It came when they remodeled their home this summer. The quints and Blayke went off with their mom and dad on many adventures while work got done on the home.

Nice to see the super-cute quints safe and sound

For the Busby family, the summer seemed very busy. And then, Hurricane Laura arrived. The family hunkered down in their home in Texas, People reported. Looking at the photo of Riley and Olivia, clearly, they escaped damage to their house and yard. Naturally, fans of the TLC show really worried about the kids. Eventually, Danielle told them every one is safe. But, family and friends in Lake Charles, Louisana experienced a lot of damage.

Now, the OutDaughtered stars work by collecting and dispatching donations to those in need in Louisiana. Perhaps fans see a bit more about that in a new season of the show. Or, Adam might share some of it on his YouTube channel. After all, with the kids back at school now, he might find the time to make his videos. It’s not clear when a new season of the show comes out again. The lasts season seemed very short.

Fans just can’t get enough of the cute quints and their sister Blayke. Even their cousins become popular with fans as they get to meet the extended family. No longer, babies, fans take a fascinating journey of discovery with the girls as they grow up and start exploring their world. Certainly, 2o20 threw everyone a curveball. But somehow, those pretty little faces helped people cope.

Who doesn’t wish their kids had a dune buggy like Olivia and Riley? But when you think about the joy they bring,  who could possibly begrudge them? Sound off your thoughts in the comments below.

‘Below Deck Med’ Stars Bugsy And Alex Get Flirty All Over Instagram
What Big Event Did Garrett Magee Pull Off In The Finale Of ‘Backyard Envy?”
‘VPR’ Fans Want A ‘VanderBUMP’ Spin-off For Jax & Brittany
‘Prison Break’ Fans Flood Sarah Wayne Callies, Onboard For Season 6?
Jinger Vuolo Fans Love That Little Felicity Wants To Read The Bible