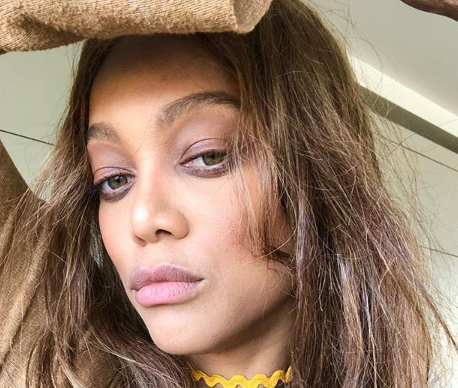 Leading up to the new episode of Dancing With The Stars, there was a lot of promo. Tyra Banks was heavily featured as the new host, but people are not feeling her. Fans took to social media to express their displeasure with the way the new host had been acting in ads. In a clip showing Tyra with the longest braid, she strikes several poses before the rest of the cast is shown.

One fan said, “please stop allowing Tyra Next Top Model POSES, IT’S CREEPY. Another said, “Tyra is trying too hard. Bad decision.” Fans don’t think the teasers should be all about her, they want to see the couples and new judge Derick Hough more.

Another fan said someone needed to tell Tyra Banks the show is about the dancers. They went on to say that’s what made Tom Bergeron such a good host. He understood that and according to the Inquisitr they don’t think the forty-six-year-old model does.

Fans also commented that Tom never showed up in the ads so the new angle is kind of strange for them. Tyra has admitted she knows it’s going to be hard to follow him as the host. He hosted for twenty-eight seasons and beloved. Some fans planned to boycott the season because he’s gone.

Tyra Banks has her fans, of course, who are supportive of her new role. One said, “TYRA! You better shows us your runway walk in your ENTRANCE!! Watching this because of you.” Another posted, “Loving this season already. Tyra is certainly perfect for this job.” An enthusiastic poster said, “you’re gonna rock it, and you’ll bring this season to a next level!”

Tyra is still living her best life. Ahead of the premiere, she posted a throwback of her on the runway. She captioned it, “walking into the ballroom tonight like… Can’t wait to show ya’ll my premiere outfit tonight!”

Tyra Banks exploded onto the stage in a bold red outfit with a voluminous head-full of curls. Greeting everyone, she kept the energy up for the whole show. She said, “I can’t believe it. I’m finally here. My family and I have been fans of this show since day one. And look, mama, I’m in the ballroom!”

Judge Len Goodman couldn’t safely fly in from the UK to be on the show. That was why Derek Hough replaced him. He gave Tyra a ten for her hosting which is high praise. According to Daily Mail, Tyra is also an executive producer on DWTS in addition to hosting. No matter if fans love her or hate her, she’s here to stay for the season.