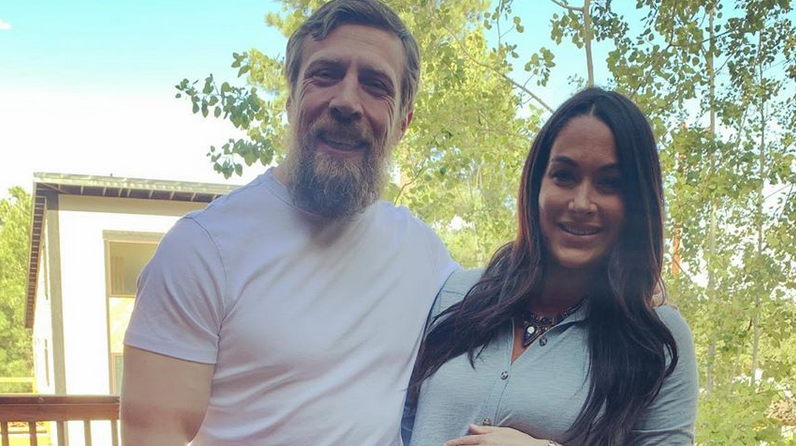 With the NFL starting back up, everyone is tuning in. This includes Brie Bella and her newborn son, Buddy. He’s a little over one month old. Brie, her husband Brian Danielson, and her three-year-old daughter Birdie also enjoyed the kickoff of the football season.

On Sunday, September 13, Brie took to Instagram to share a few new photos. The mom reveals that Buddy is all dressed up for the occasion. She writes, “Soooo excited for some @philadelphiaeagles and @seahawks today!!! 💚💙 Trying to convince Buddy to be an Eagle Fan but I’m thinking he’s leaning towards the Seahawks….at least my Bird is an Eagle girl!!”

In the photos, Buddy is wearing a brown onesie with football laces on the front. The first picture features Buddy on his own. The next one is of proud big sister Birdie holding her little brother. There’s also a family selfie and a father-son photo included in the post. In an Instagram story, Brie reveals that she’s “telling him [Buddy] all about football.”

So, it sounds like Buddy has no choice but to be a football fan. Fans are interested to see whether Buddy ends up liking the Seahawks or the Eagles. It will be a little while until he’s able to decide though.

Naturally, Brie Bella’s Instagram followers are gushing over the sweet family. They think the baby boy is adorable, and they love to see new photos of him, as well as Birdie. Fans are pointing out that Buddy looks just like his dad too. Some think it’s not fair to Brie, especially because Birdie also looks like Brian.

Brie and Brian welcomed their son to the world on August 1. His full name is Buddy Dessert Danielson. After his birth, Brie and Brian revealed that everyone was healthy and doing great.

Since his birth, Brie has been sharing peeks into her life as a mother of two. She posts plenty of photos of both Birdie and Buddy, as well as pictures of herself and what she’s up to.

Nikki and Brie gave birth in the same hospital in rooms right next to each other. So, their sons got to meet each other right away.

So, what do you think of the new photos of Buddy? Share your thoughts below.