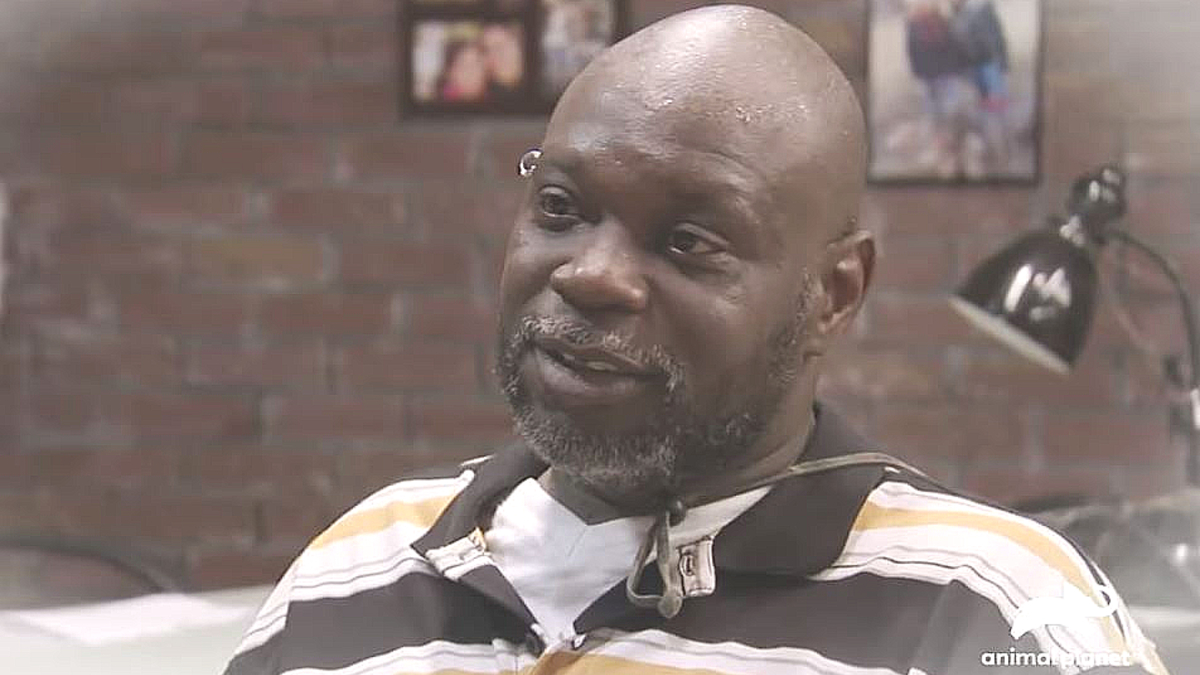 The coming episode of Animal Planet’s Pit Bulls & Parolees is going to be one that pulls at the heartstrings as Earl, Villalobos’ favorite parolee, is arrested for driving with controlled substances and an open container while speeding.

TV Shows Ace has the exclusive ahead of the Saturday episode as VRC’s (Villalobos Rescue Center) favorite parolee gets arrested, leaving his future at the rescue uncertain.

Also on this episode, a couple comes to VRC hoping to find a friend for their bulldog.  And Mariah and Spencer rescue a dog left behind at an abandoned home, only to discover the dog has severe injuries.  An exclusive TV Shows Ace preview of that moment will be posted Friday.

Please donate to VRC to help post-hurricane Laura if you can!

In our clip below, VRC ower Tia Torres is giving us the backstory on her favorite employee and parolee, Earl.

Remembering their first meeting, she adds: “I’ll never forget the day I interviewed Earl for his job.” She asked Earl, “So what were you…when that’s the first time… what were you in prison for?”

Earl was truthful. He says: “My first time I wanted to be an armed robber.”

Tia appreciates his honesty and says: “He owned it. He just owned it, you know… he wasn’t a victim, it wasn’t somebody else’s fault. He wasn’t framed.
Just like they say the first step is just admitting you got a problem and he did.  I said, ‘you know what this guy’s probably going to do all right,’ and he has, when it comes to that part of his life he has.”  She adds: “It was shocking and heartbreaking when earl became addicted to his pain meds…things had gotten so bad that he just couldn’t do his job anymore you know we basically went full intervention on him. We took Earl to rehab.”

Then, we find out in the preview that Earl has just been arrested again.

A bit heartbroken, Tia says: “Earl got pulled over doing over 80 miles an hour, open container… there were some prescription pills [and] the fact that he has a criminal record,  he’s an ex-felon, you know.  It doesn’t take much to get somebody in trouble and land him back in jail.”

Earl is an only child who was born and raised in New Orleans by a single parent. One night in 1986, Earl, only 17 years old, was sent to prison for armed robbery and attempted murder.

He received a 22-year sentence but only ended up serving 11 years and four months.

After release he was arrested once more for possession with intent to distribute and was sent back to prison.

In prison a second time, Earl lost the function of his right arm from an injury. Despite his disability, Earl has a slight advantage over the other parolees; he worked as a dog handler while he was in prison.

Now, VRC is his first official job where Tia Torres has bet on him to be part of her team.

Tune in to TV Shows Ace tomorrow where we have a second exclusive preview of Saturday’s no miss Pit Bulls & Parolees on Animal Planet: