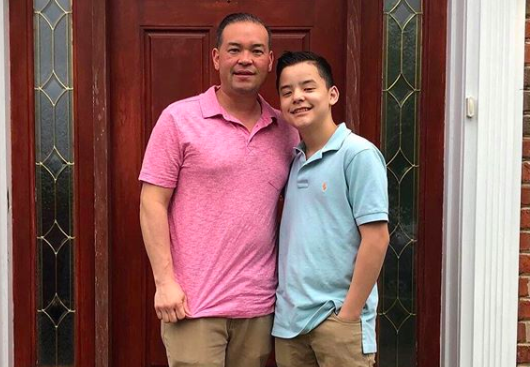 Former star of Jon & Kate Plus 8, Jon Gosselin, is now being accused of physically abusing his 16-year-old son Collin. These accusations have started up an investigation by the Berks County Children & Youth Services in Pennsylvania.

According to US Weekly, Jon Gosselin’s 16-year-old son is accusing him of “causing bodily injury to a child through recent act/failure to act: hitting/punching.” But, Jon is not specifically named in the official report. However, it seems Collin posted specifics in a now-deleted Instagram post.

Us Weekly reports that Collin posted last week that his dad is a liar. Collin continued saying, “Yesterday he beat me up and thought nothing of it, he punched me in the face and gave me a swollen nose and I started bleeding. He then continued to kick me in the ribs after I was on the floor. He is a liar.”

Fans have even taken to commenting on Jon Gosselin’s old Instagram posts in an attempt to try to check on Collin.

One fan wrote, “Did Collin’s IG account get hacked…or does he need help? Someone needs to address it. I for one only care about Collin’s well being. He has been through enough. Just let us know he is ok.” Another user wrote, “Is Colin okay?” The comments from fans are less than a week old, despite being on Jon’s post from July 26.

However, this appears to be the only incident of abuse between Jon and his son known publicly. Yet, Jon’s story sounds a little different.

Happy Fourth of July 🇺🇸 to every one!!! Sorry for the late post!!! Collin had other plans with his friends this weekend, that’s why he is not in the picture (shame I have to explain all that, but I just did)!!!!

According to Entertainment Tonight, Jon Gosselin is denying the physical abuse claims.

Jon’s representative told ET that he has never abused Collin, but Collin has endured severe trauma. The rep’s statement continued stating, “No charges have been filed against him and there’s no ongoing Children & Youth Services investigation.” Additionally, it states that Jon is,”a loving father who has worked hard to ensure that his son gets the support and help he needs.”

Kate Gosselin also spoke to the US Weekly,  saying that she does not want her children around her ex-husband. She went on to say, “You do not kick a child. I don’t want to hear any excuses from anyone, not from his father, not from local law enforcement, not from court personnel whose job is supposedly to ensure the best interests of my children.”

She and Jon welcomed Collin and his sextuplet siblings — Aaden, Leah, Alexis, Joel and Hannah — in 2004, joining the older twins Madelyn and Cara.

Hannah has lived with her dad since 2018. Jon also got custody of Collin in December of that same year when Kate did not come to court.

But, it seems that Jon’s relationships are strained with the majority of his children.

Leah, Joel, Alexis, and Aaden still live with Kate Gosselin. The older 19-year-old twins are often away at college and not living with either of their parents. But before college, they lived with Kate.

Additionally, Jon Gosselin shared that he doesn’t really speak with his other children who don’t live with him.

If you or someone you know is experiencing child abuse, please call the Childhelp National Child Abuse Hotline at 1-800-422-7233 for confidential support.

What Is Jill Duggar & Derick Dillard’s Rescue Dog’s Name & Breed?
When Will ‘Bull’ Season 5, Episode 10 Air?
Did Amy Halterman Give Birth After The Scare During Last Week’s Episode?
‘Marrying Millions’: Are Kevin & Kattie Still Together?
‘MAFS’ Jamie Otis Then And Now