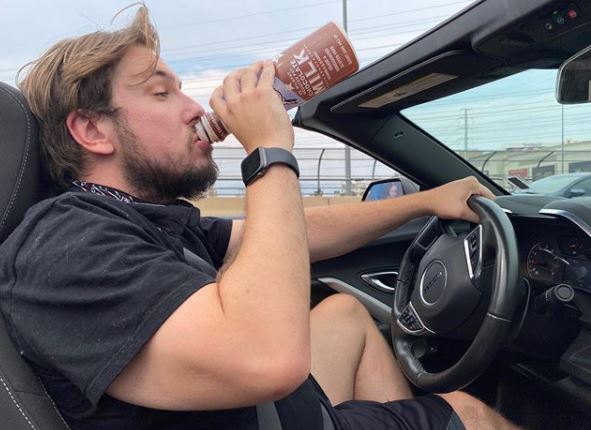 Scripted or fake? TLC fans have been wondering how real 90 Day Fiance really is! People believe that some of the drama on the show is almost too crazy to be true!

According to a recent article done by Cheat Sheet a few 90 Day Fiance stars do say that the show is overly produced/edited and scripted. Geoffery Paschel from 90 Day Fiance: Before The 90 Days, stated that his story was shot and edited fairly with no added drama to lure in fans.

Some don’t agree with Geoffery of 90 Day Fiance!

Courtney Reardanz from 90 Day Fiance did an interview with The Dominick Nati Show in May, were she spoke very candidly about the show’s process. Courtney stated that “the show’s producers are good at creating and building on drama.”  That is their job right?

One pointed for NOT scripted and one point FOR scripted!

Chris Thienerman and Nikki Cooperhas from 90 Day Fiance said that some of their scenes were scripted! In a YouTube video, Chris tells the truth! “Absolutely parts of it is, no question,” Chris said. “Parts of it are real.” Nikki also stated on Facebook that 90 Day Fiance scripted the scene where Chris asked David’s then-fiancé Annie Suwan for a massage. “Yes, the awkward scene of Chris asking for a massage was SCRIPTED,” she wrote. “The producer asked him to say it & Chris had to say it more than once because, it didn’t come off as natural. We were fed our lines while sitting at the table, which is why no one reacted.”

As I peer into the eyes of this creature, I can’t help but wonder what he is thinking. Does he think I am gross? Maybe he thinks I am venomous. Is he giving me the benefit of the doubt that I may actually be friendly and therefore he is not striking? Or possibly he is in a fearful trance because his whole life is flashing before his eyes, just like us when we are in a potential near-death moment? I’d wager to say yes to several of those questions. He has to have the same, albeit less complex, thoughts about me as we have about him. As many saw in my reel, I spotted him from a distance and just scooped him up. His surprise was evident in the way he peered at me with such obvious thought. . While some individuals would prefer to selfishly decapitate any snake that comes into their presence, I am the opposite. It’s all about perspective. I try to put myself in the snake’s perspective. Do you really think this animal had a choice what it was going to be when it was created? I believe this view should extend to every living organism. I can’t help but place myself in their imaginary shoes. So, the first thing I do when I find a snake is that I think about its perspective and situation. Maybe he was sunbathing after a long hunt when I stumbled upon him. Perhaps she was looking for the perfect spot to lay her eggs. Who am I to come through like a bulldozer interrupting or, as with some people, destroy their lives without stopping to consider their points of view? . In life, we are all guilty of only wanting to hear opinions that mirror our own. If there is a disagreement, we, most of the time for most people, take it as a stab against us. But, with said, how do we learn and grow? Being able to see the world from another’s eyes strengthens any relationship, whether it is one we have with a snake or a human (who also could be the quintessential “snake”). Perspective understanding is more important now than ever, as we are all being forced to make decisions for those which we cannot foresee the outcomes. It is easy to pass judgement and avoid adopting someone else’s worldview. But, as many of us know, the easy way is seldom the right way…

Score another point for NOT fake or scripted

90 Day Fiance: Before the 90 Days participant Geoffrey Paschel says he never even had to re-do moments unless the lighting was off. Geoffery believes the show is real and not faked.  When talking about editing from the crew he went on to say “I’m not gonna b*tch about the editing on my stuff. Or the retakes. A lot of the retakes weren’t anything that really mattered. When I proposed to her and stuff, that was all in one take. The walk up to there was maybe not in one take because they had to keep bouncing over each other. But it was all real,” he said.

Recently fans have been questioning one relationship, in particular, Colt Johnson and his, now, ex Jess Caroline. Fans recently took to Colt’s Facebook page wondering is the fight between him as Jess was real! One commenter said “this cant be real because why would someone beautiful want him! One person simply asked, “this shows fake right”. None of the comments has received any reply’s back.

Scripted or not scripted the jury is still out. You decide! Regardless, everyone still loves 90 Day Fiance.

Kanye West’s Rumored Girlfriend Sets IG On FIRE With Nude Snaps
Stream This: Lucy Lawless Back For ‘My Life Is Murder’ On Acorn TV, Preview
Chelsea Houska Catches Heat For Editing Photos Of Her Children
‘The Young and the Restless’ Spoilers, August 2-6: Phyllis Gets Everything She Needs
‘Love Island USA’: Shannon & Josh Became Fan Favorites — Here’s How