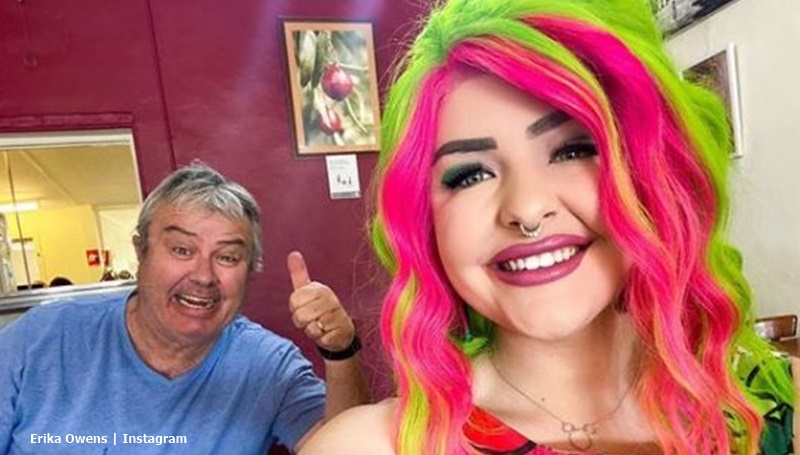 90 Day Fiance fans know that Erika Owens might be the most colorful person on the TLC franchise. She just loves rainbow colors and even went as far as dyeing her hair in a range of attractive colors. Now, she ditched the rainbow and went with startling yellow neon hair. But, she told fans she did it for a good cause.

TLC fans know that these days, Erika dates a guy named Chris Siclari. She made the announcement on her Instagram. Plenty of fans wished them all the best, But, some fans took a lot of offense. We reported that critics felt very disappointed in both Erika and Stephanie Matto. When the couple split, fans accused Stephanie of just using the show for fame. In fact, they never believed she was really into women.

When 90 Day Fiance fans heard about Chris and Erika, many of them slammed her. They felt let down, and some of them accused her of using the show. Genuine LGBTQ community members think she just played the rainbow card for television. However, in fairness, she always described herself as bisexual. Nevertheless, it rankled with many people that she now dates Chris. But, Erika still retains a lot of fans who love her bubbly personality.

On her Instagram post this week, Erika revealed her new buzzcut hairstyle. That bright yellow looks brighter than the sun. Certainly, if she walked through the mall, a million heads probably turn and follow her. She captioned her post with, “HI GUYS! New hair, same old me. It feels f–king great to say good bye to this chapter of my life.” But then, she spoke about nearly reaching her fundraising goal for the”Cancer Council!” With less than 3k to go, she asked her fans to spare a few dollars for the cause.

The 90 Day Fiance star thanked her parents and her boyfriend who support her efforts. She also expressed her thanks to fans who already donated money. Ideally, Erika hopes for a cancer-free future. In fact, she feels so deeply about it, that she refuses to stop putting out her message until she brings in 10k. And it looks like it works. Several fans asked for a donation link. And Erika gave it to them.

⁣HI GUYS! New hair, same old me. It feels fucking great to say good bye to this chapter of my life but it feels even better that we’re less than $3000AUD until we reach my $10,000 goal for the Cancer Council! Please consider donating even if it is just a few dollars – it all counts!! ⠀ ⠀ Huge thanks to my parents, my bestie @calamitytash, my colour queen @victoria_maneconcept and my gorgeous supportive boyfriend @plantbasedinstabaddie – as well as everyone who has donated to this incredible cause – let’s work towards a cancer free future together!! ⠀ ⠀ I am continuing to fundraise for another few weeks with some super fun things planned – I won’t stop until we fly past that $10k goal! Biggest love and thank you to everyone who has donated and supported both me and Cancer Council ❤⠀ ⠀ #90dayfiance #beforethe90days #90dayfiancebeforethe90days #tlc #realitytv #loveislove #lgbtq #lgbtqia #lgbt #alternativefashion #rainbowfashion #kawaiifashion #innes #evohair #australianfashion #adelaidefashion #melbournefashion #manicpanic #shavedhead #baldhead #yellowhair #neonhair #rainbowhair #adelaidehairdresser #adelaidehair ⠀ #rainbowlover #queerfashion

Despite the critics, many fans still love Erika and say nice things to her. One of them commented, “I almost lost my life after losing my hair but I’m a fighter and very thankful to be here today and get to smile at posts like yours!” It certainly looks like cancer sufferers really appreciate Erika’s efforts at raising funds with her bright neon yellow hair.

2 Other ‘RHOBH’ Stars Are Dealing With Their Own Legal Drama
Brush Up On Brendan Morais Before ‘Bachelor In Paradise’
‘My Big Fat Fabulous Life’ Season 9: Air Date, What We Know
Kendall Jenner Flaunts Her Goodies In Barely-There Green Ruched Bikini
No Longer Boy Crazy? Scheana Shay Gets The Life She Wants