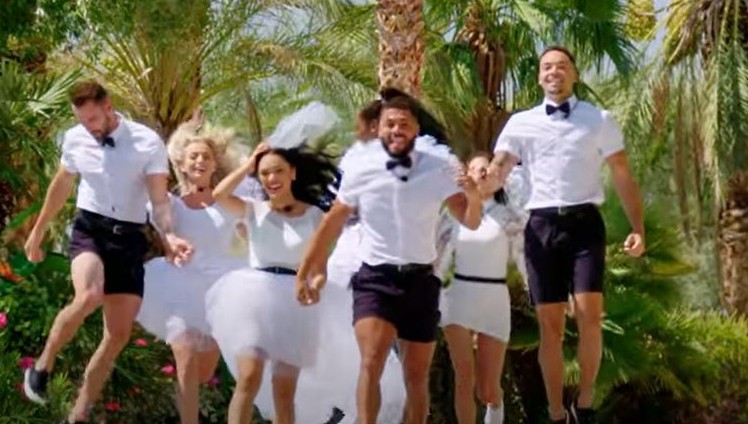 Love Island is about to have a huge twist. There will be more drama, more fun, more couples and tons more temptation. It’s time to incorporate part of the original British version of Love Island. Now, for the first time on the United States version of the show, the islanders will face a new challenge. Tuesday night the islanders will meet Casa Amor. What does this all mean?

People shared all the details of what fans can expect to see happen on Tuesday. Basically, ten new islanders will be introduced into the mix. It will force the current couples to decide if they care enough about each other to continue on together. Or will they want to try things out with someone new?

The new twist will move the OG guys to Casa Amor. Five new ladies will join them there. And, the OG ladies will have five new hot men living at their villa. Will temptation force the current paired couples apart?

What happens in Vegas… ends up all over the telly! 🎰 Check out the new Islanders taking a chance on love, tonight at 9pm on @itv2 and ITV Hub #LoveIslandUSA

Host Arielle Vandenberg dishes on what to expect

She went on to say, Plus, “this year we’re on seven nights a week, which is different from last year. And I think that is much-needed right now, because everyone is stuck at home. We want to watch hot singles living their best life!” Love Island is about to get even hotter.

Our Islanders are all coupled up 🥰 But who do you think are the real deal? #LoveIslandUSA

Those who have not been watching Love Island are missing out. The show is based on a British show, which can be viewed on Hulu. Last year was the United States first season of show. It filmed in Fiji at a villa. This year things are somewhat different due to the ongoing pandemic.

Season 2 continues filming in Las Vegas on top of the Cromwell Hotel. They all share a multi-level rooftop that has been renovated to make Love Island what it is supposed to be. There is a communal bedroom, the hideaway suite, a fire pit and more. Plus this new location features a secret jacuzzi.

While it’s different filming in Vegas versus Fiji, however, it’s also amazing. The host said, “I feel like it brings this energy — Vegas energy. It’s freaking lively, it’s exciting, it’s bright, it’s fresh, and I feel like it kind of gives Love Island U.S. a different vibe. The villa, it’s just incredible what they can do. It looks so cool.”