Is Vanderpump Rules star Scheana Shay engaged?! She seems to imply that in the comment section of her recent Instagram post. Or, at the very least, she lets fans think she is. Scheana has been dating rugby player Brock Davies since late 2019.

The couple recently moved in together in San Diego. They also went through the trauma of a miscarriage after an unexpected pregnancy. The Pump Rules star did not think she could get pregnant naturally. During the last few seasons of Vanderpump Rules, fans saw bits and pieces of her fertility journey.

On Monday, September 7, Scheana shared a photo on her Instagram. The photo includes Scheana, Pump Rules co-star Ariana Madix and friend Cortney Erin. The three ladies are all wearing white gowns. The photo caption says, “On Mondays we wear white.”

The photo is tagged to the Rancho Valencia resort in San Diego.

Several fans focused on Scheana’s near-wardrobe malfunction. With one leg lifted onto the bed, she is practically flashing the camera. Or so fans think. the “Good as Gold” singer retorted to one follower that she has “flesh-colored shorts” underneath the flowing gown.

The all-white outfits gave fans the feel of a wedding. Some fans quickly pointed out a barely-visible ring on the ring finger of the reality star’s left hand.

One of the Pump Rules’  followers asked outright in the comments if that is a ring on her finger. Scheana fueled engagement rumors with her simple reply, “Yes.” As Reality Blurb reports, Scheana never offered further clarification. 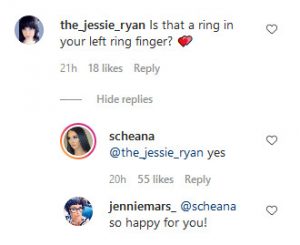 As a result, many of Scheana’s followers took her initial response as a confirmation of an engagement. However, other fans noted that if Scheana were engaged, she wouldn’t keep it a secret. Rather, she’d shout it from the mountains.

How Long Has She Been Sporting the Ring?

An investigation of Scheana’s other recent Instagram posts and YouTube videos reveals that she’s been sporting the ring for a few weeks, at least. It’s difficult to say if it is the same ring, but she was wearing a ring on her left hand in this Instagram post from two weeks ago.

As Pump Rules fans may know, Scheana has her own YouTube channel. She started it around the time news leaked that a Bravo editor was editing Scheana badly on purpose. The SURver wanted to give fans a true and honest glimpse into her life. Many of her videos feature boyfriend Brock Davies.

Looking through her videos, she’s been wearing a ring on her left hand for weeks. The ring is present in the video from August 26, 2020. In the video, Scheana and Brock head to Sedona, Arizona for her sister’s birthday.

She typically uploads her videos on Wednesday. Perhaps she will address the engagement rumors in this week’s YouTube video.

Scroll down to the comments and tell us if you think a ring on her left hand indicates that Scheana is engaged.

Bravo has yet to announce the future of Vanderpump Rules. Follow us on social media for updates on all the latest TV news, including Bravo shows.