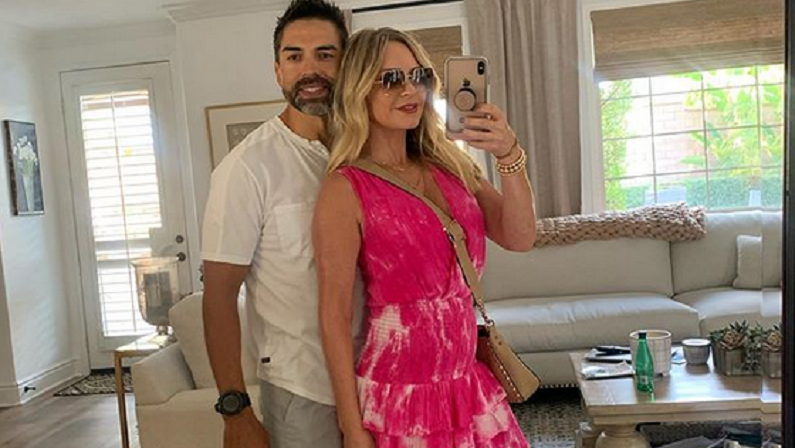 Tamra Judge and Lydia McLaughlin are at war. Both women are no longer on The Real Housewives of Orange County. But that hasn’t stopped them from feuding off the show. Viewers never really got to see them together on the Bravo series.

That hasn’t stopped them from having opinions about one another. Lydia has a new venture that she’s currently promoting. She shared her thoughts on her former co-stars. That’s when she slammed Tamra from not moving on from the reality show.

She called her “pathetic.” Now, Tamra is fighting back mad by calling Lydia a “hypocrite” because of her Christian faith.

Lydia McLaughlin had choice words for her former RHOC co-star

On Saturday, September 5, Lydia McLaughlin didn’t hold back on her feelings for Tamra Judge. She “spilled the tea” on her former co-stars. Lydia called out Tamra for holding onto the RHOC franchise. The reality star is coming back with a new show called Glitter Town.

Lydia stars on the show alongside her mother Judy. The two get into mischief. They even run into former RHOC co-stars such as Alexis Bellino, Gretchen Rossi, and Lizzie Rovsek. During the interview, Lydia shared her thoughts on Viki Gunvalson and Tamra leaving the series.

“I felt like it was a long time coming, honestly,” Lydia told Bravo’s The Daily Dish. “I think it is a good switch-up. I’m excited to see what the cast does.”

✨ Glitter Town is HERE! ✨ Click the link in my bio to watch @bravotv 👉🏼scroll to watch a sneak peek • • My mom and I have been working on this digital series and our goal is to spread love and laughter. Make you smile and brighten your day. 🥳 • • Glitter Town shows our relationship and how we came up with the idea and headed to New York to make it happen. I’m so excited to share these adventures with you.🕺🥰♥️ love you @ocjudymom #glittertown #linkinbio

The Christian entrepreneur revealed that she’s still a fan of Viki. The two ladies ran into each other “a couple of times.” However, when it came to her feelings about Tamra, she stirred the pot. As fans know, Lydia loved to cause drama on RHOC.

“I do know that Tamra … she’s not letting it go,” she explained. “She’s still talking about it. I just feel bad for her, it’s kind of, like, ‘OK, you need to move on and do something else.’ She’s talking about the next season, and I think it’s a little … it sounds pathetic.”

Lydia revealed that both Shannon and Tamra blocked her on social media. So, she’s not aware of the ongoings in their lives. The former reality star was only guessing what Tamra is like these days. Lydia added that Tamra could have unblocked her, but she didn’t bother to check.

The Real Housewives of Orange County alum clapped back at Lydia shortly after the interview aired. And she did not hold back. Tamra called Lydia a “hypocrite.” But that’s not all. Tamra also claimed that Lydia paid for her new project.

“Please don’t feel sorry for me sweet Christian girl, I’m doing just fine,” she wrote on Instagram. “I have two companies… a real estate license, 4 kids, granddaughter, an amazing husband, and a new TV show in the works (not an online series that I had to pay for myself). I watched one of your episodes, the one where you talk about empowering women and lifting them up. Great episode, hypocrite!”

Guess it’s not all glitter and rainbows. #CommentsByCelebs #RHOC

“I’ve been off 6 months,” the VENA CBD entrepreneur said. “Year she got fired twice years ago and still talking housewives.”

Tamra declined a limited role on RHOC because she wanted to focus on her family. She starred on the show as a full-time Housewife for 12 seasons since 2006. Meanwhile, Lydia announced her “break” from the hit reality series in February 2018. She first joined in Season 8 but left before returning as a full-time cast member in Season 12.