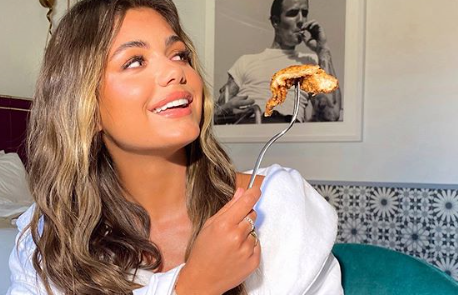 Hannah Ann Sluss worked her way into Bachelor nation’s hearts when Peter Weber revealed to her that he had feelings for the runner up, and they broke up with cameras rolling. She had some memorable moments including an incident dubbed, “champagne gate,” where she “accidentally” opened another girls’ special champagne. Since then, she’s been a presence on social media. She and the other Bachelor girls did a couple of Tik Toks and she and Madison Prewett had an Instagram live heart-to-heart about the season.

There was even a moment where she got to show off her skills on the field. Who remembers that famous football game Peter Weber made his girls play to see who would get a date? That was just one of many things that fell flat with his season, although Hannah Ann Sluss’s competitive nature came out. A recent tweet from a fan pointed out things would be awkward in the Pittsburgh Steelers locker room. Hannah Ann reportedly spent time with two of their players.

Who Did Hannah Ann Sluss Go Out With?

According to NY Post Hannah Ann Sluss has recently got the attention of Orioles prospect Adley Rutschman. In March, however, she was spotted out with the Steelers newest waiver pickup, Josh Dobbs.

That isn’t the reason fans think things will be weird though. Hannah had also spent time with another player, Mason Rudolph. The two were spotted together in April and according to a source who spoke to TMZ, “they seemed lovey-dovey.” At the time of their coffee date, they’d been spotted out together three times in a short period of time. This was during a time, Hannah had teased fans she was entertaining a “quarantine fling.”

The football team responded to the Twitter user about their locker room. Steeler Nation’s official Twitter set the record straight by saying, “Hannah and Dobbs are best friends, she wasn’t dating him.” One funny fan replied, “thanks, we all care.”

Dancing in the kitchen, making the most out of every moment 🤪💕🍕

Hannah Also Loves Food And Standing Up For Herself

In addition to football players, Hannah Ann Sluss also loves posting about food on her Instagram. The above video features her dancing with her girlfriends to Justin Bieber’s Yummy. In front of them is a spread of sweets.

In another picture, she’s standing with a plate of chicken and waffles. She captioned it, “breakfast with bae.” One of her followers commented on the video of her dancing, “you’ve gained weight.”

Hannah Ann Sluss was quick to respond to the troll, “stop body shaming me and other women. It’s disgusting.” Other fans were quick to come to her defense telling her she looked beautiful. Fans will pay attention to see if Hannah visits any football quarantine bubbles when the season starts.

‘American Pickers’: Frank Fritz Did Rehab Before Getting Fired
Joy-Anna Forsyth Pregnant?! Another Duggar Baby On The Way?
Kailyn Lowry Opens Up About Weight Gain And Nasty Comments She Receives
Carlin Bates Under Fire, Is She Abusing Her Dog?!
Tana Mongeau Issues Apology To Khloe Kardashian & Tristan Thompson