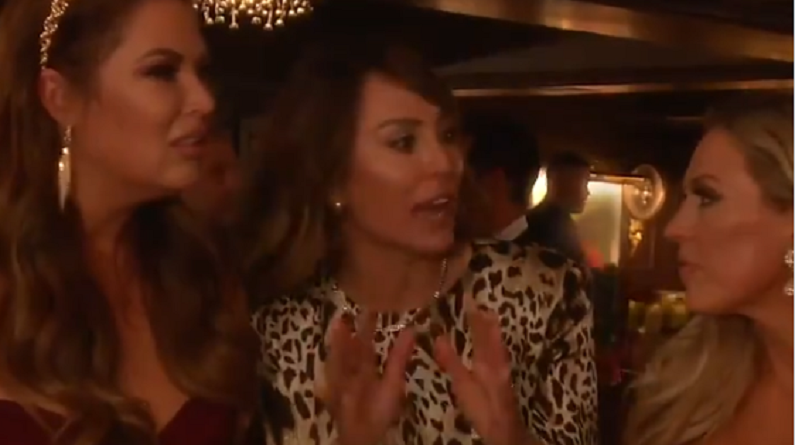 The Season 15 trailer for The Real Housewives of Orange County is finally here. And it features many returning cast members, including Kelly Dodd. But fans aren’t happy to see her back. They called out Bravo for keeping her on the show despite her controversial comments in the past few months.

In the new promo, Kelly Dodd stands next to Shannon Beador. Fans have been calling for the network to fire the reality star for her “insensitive” remarks.

Bravo was off to a strong start in June. The network fired four Vanderpump Rules cast members and one from Below Deck Mediterranean. But the firings have ceased since then.

The Season 15 RHOC trailer is packed with surprises. Bravo dropped the new trailer on Wednesday, September 2. It went viral on social media and it also aired during The Real Housewives of Beverly Hills Season 10 reunion. Rather than seeing Tamra Judge and Vicki Gunvalson on the show, viewers will get to know Elizabeth Lyn Vargas.

She’s Braunwyn Windham-Burke’s friend. But the one person that’s making RHOC fans mad is Kelly Dodd. In the trailer, she’s seen with her fiance, Fox News correspondent Rick Leventhal. The new season looks to be about her wedding. Kelly tries on wedding dresses and wonders if she should wear white since it’s “supposed to signify ‘virgin.'”

It doesn't get any realer than this season of #RHOC, premiering Wednesday, October 7! pic.twitter.com/kFZESkn1oy

Kelly also brags a lot about her intimate life with Rick. Other than that, Kelly seems tame in the trailer, compared to her social media comments. However, that doesn’t stop fans from slamming Bravo for including her in the cast. Once the network debuted the new cast photos on its official Instagram page, fans went crazy.

It’s no secret that Bravo fans want Kelly Dodd gone. She’s made headlines for her comments on social media. Most fans remember the comments she made about the coronavirus pandemic. Others simply nitpick every little thing Kelly does online.

Bravo’s Instagram page was filled with comments about Kelly Dodd returning to the show.

“Kelly is still there?? I’ll pass…” one viewer wrote.

“It would be good only if Kelly Dodd was out,” another added.

“Didn’t they give Kelly the boot yet?” questioned one Instagram user.

A new ’Wife comes to shake up the group in already uncertain times when the #RHOC returns Wednesday, October 7! The Season 15 trailer awaits you at our link in bi🍊!

Even those who don’t keep up with the drama know that Kelly is bad news. The Instagram post received an overwhelming response to Kelly’s return. Back in June, Bravo fired Stassi Schroeder and Kristen Doute for their past racist actions. Since then, fans pleaded for the network to fire several other reality stars, including Kelly herself.

What are your thoughts? Are you disappointed that Bravo decided to keep Kelly Dodd despite the outcries? Sound off below in the comments section.

In the meantime, The Real Housewives of Orange County Season 15 premieres Wednesday, October 7 at 10:00 p.m. ET on Bravo.

‘Yellowstone’ Fans Speculate That Rip Could Be Murdered In Season 4
Dale Moss Deletes Instagram Stories Hours Before Clare Crawley Breakup Announced
When Does The Next Episode Of ‘This Is Us’ Air?
‘Unexpected’: Chloe’s Mom Jessica Rips TLC Over Todd
‘Bachelor’ Villain Victoria Larson’s Past Criminal Activity Surfaces