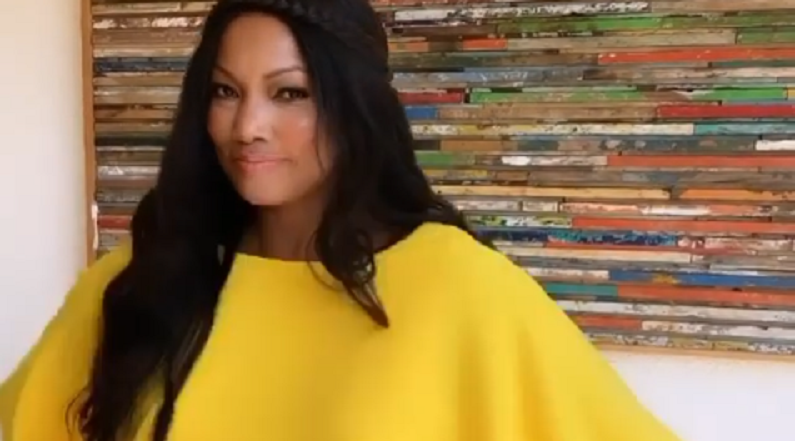 Garcelle Beauvais is getting praise. Part one of The Real Housewives of Beverly Hills Season 10 virtual reunion kicked off on Wednesday night, September 2. Things kicked off with viewers learning more about the first-ever Black Housewife. Garcelle was featured in a special montage from the season.

Then, things quickly got awkward. Kyle Richards accused the RHOBH newbie of stifling her. She claimed that Garcelle never paid the $5,000 she bid at her charity event. Now, Garcelle wants to address Kyle’s accusations.

In the meantime, RHOBH fans are showing their support for Garcelle. They feel it was out of line for Kyle to bring up that issue.

Before the RHOBH Season 10 reunion aired on Bravo, Garcelle Beauvais took to her Instagram Stories to address the charity drama. She wanted to set the record straight about her charity bid.

“Hey guys, I wanted to take a few minutes to say my peace if you will. You guys know that I’m a straight shooter. I say it like it is, I try to speak my truth always,” Garcelle said in the clip. “I got called out at the reunion of Beverly Hills saying that I bid at a charity event and did not pay for it.”

Garcelle explained that the donation “fell through the cracks innocently.” At the time, she was traveling for business. And it somehow didn’t go through. The actress “knows the show is about drama,” but it’s about her “character” and “integrity.”

Garcelle didn’t take too kindly to Kyle’s accusations. “When it comes to who I am as a person, I don’t play around with things like that,” she simply ended her clip.

On Wednesday night’s episode, Kyle accused Garcelle of “not being genuine.” She slammed the Coming to America star for not forking over the $5,000 that she bid on at her event. Garcelle fought back, saying that Kyle “better watch what you’re saying, that is not true.” But Kyle insisted that “no payment has been made.”

Garcelle Beauvais quickly became a fan-favorite. Viewers think she’s a breath of fresh air. They love that she tells it like it is. And they like it when she asks her castmates thought-provoking questions.

Some of them took to Twitter to show their support for Garcelle following part one of the reunion. Others slammed Kyle for bringing up the matter of money in the first place.

“You know, I am just going to say. It is suspect as hell that all of a sudden Kyle wants to mention money amongst these women when a black woman just happens to be on the receiving end of her target,” one follower tweeted.

When you’re sitting on some hot tea 😂 #thursdaymood

“Kyle blurting that out on the reunion was a d&ck move [SIC],” another wrote. “One of the worst comments ever. Terrible. Garcelle did NOT deserve it.”

“I figured as much, #Garcelle, as soon as I heard it, the 1st time, in the #RHOBHReunion promos,” a third viewer wrote. “You ring true with #integrity, Garcelle! BTW your name is so beautiful. And THIS: You were a wonderful addition to #RHOBH!”

Repost from @therealdaytime • We’ve seen your comments and we couldn’t be more excited to announce @garcelle as our newest host! “I am thrilled to be joining the dynamic, bold and diverse women on the award-winning talk show The Real, ”My love for pop culture and news blended with my natural gift of gab, has always made me gravitate towards a talk show environment. It’s also exciting that it’s happening right after my amazing time joining The Real Housewives of Beverly Hills.” ⁣ ⁣ Season seven of The Real returns Monday September 21st! Trust us, you don’t want to miss it! ⁣ ⁣ 📸 @ryanwestphoto

Now, Garcelle is taking on a new role. She’s the new co-host of The Real. It looks like her time on RHOBH could be coming to an end.

‘Counting Cars’ Is Back With More Sin City Restorations, Alice Cooper!
Is This A Sign ‘Bringing Up Bates’ Will Be Canceled?
WOAH!! Lindsie Chrisley Stepping Into Savannah’s Territory?
‘Below Deck Med’: Is Lexi Wilson Engaged? Malia White Spills The Tea
‘Love Island USA’: Aimee Grinds On Wes After Elimination (Video)