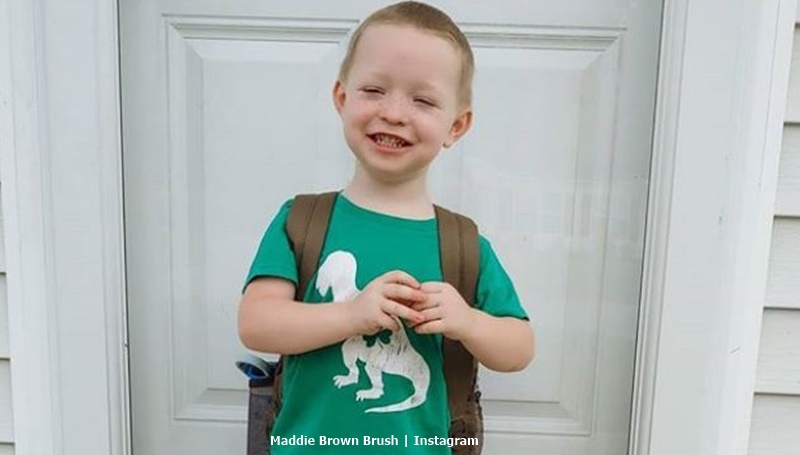 Sister Wives star Maddie Brown told her fans that Axel starts Pre-K. Of course, most parents feel a bit emotional as kids reach this milestone. Suddenly, they’re not babies anymore, or toddlers in the terrible twos. And, Axel looks all grown-up wearing his little backpack.

The three-year-old Brown grandchild brought a lot of joy to Janelle Brown. She adores kids, and now she loves being a grandma. As often as she can, she gets herself off to North Carolina and enjoys time with Axel. Recently, she went across there in celebration of Axel’s little sister Evie-K. Her birthday coincided with her first surgery for her FATCO syndrome.

Now back in Flagstaff, the Sister Wives star probably thinks about Axel making his way to school. Maddie took to her Instagram and shared about Axel and Pre-K. Fans thought he showed a strong resemblance to Janelle in her photo. There, Maddie said that he looked forward to seeing friends and his new teacher.

Axel grows up way too fast

In her caption, Maddie said, “First day of PreK 3s for Mr. Axel. My heart can not handle how fast he is growing 😭.” The young mom of two also spoke about his excitement. “Friends and Ms. Kitty Kat” seemed the main attraction rather than learning. She noted that his teacher’s name’s “Ms. Kitty.” Plenty of fans understand the excitement and sadness that accompanies kids going off on their first school day.

Many Sister Wives fans commented about the news. One said, “Don’t blink or you’ll miss so much. Very handsome Axel. Enjoy this new adventure.” Another one noted, “Yay for Axel! He sure looks ready. Have a safe and fantastic school year. ♥️” Another one said, “Such a big boy already! What a cutie, Enjoy every minute….it goes by so fast💙.”

First day of PreK 3s for Mr. Axel. My heart can not handle how fast he is growing 😭. He was extremely excited to go see "friends and Ms. Kitty Kat." (His teacher's name is Ms. Kitty.)

Kids at pre-K a big deal for mom and child

For many kids, starting Pre-K becomes all about their first big separation from mom. Of course, it also works the other way round for mommy. Parents.com helps with a lot of tips for that moment. In fact, one of the main issues for little ones involves learning a “whole new set of rules.” Perhaps, Maddie read up on it or got some advice as Axel looked relaxed about going off to school.

The outlet suggests that parents prepare the kids weeks ahead of Pre-K. Explaining what they can expect could make the transition much easier. Meeting the teacher, role play and play dates with friends should help a lot. No doubt, the Sister Wives mom shares some feedback on how it all went for Axel on his first day.

Do you have any tips to share for the first day at pre-K? Sound off in the comments below.