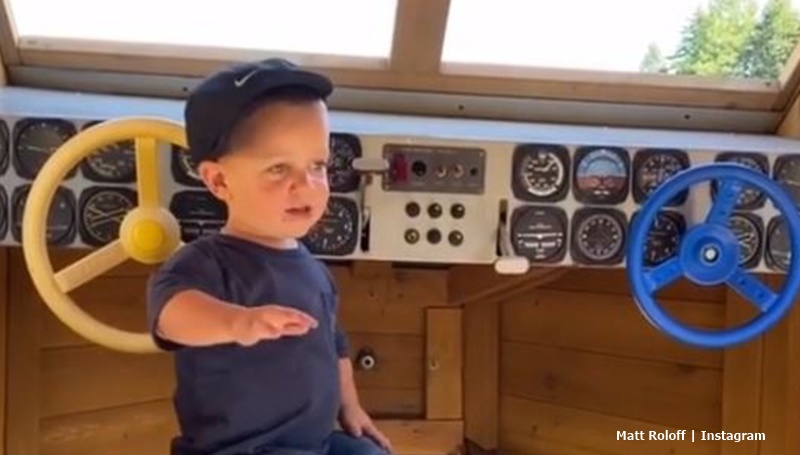 LPBW fans saw quite a lot of videos that Matt shared of Jackson recently. They went berry picking together. And then, they went to the apple trees and gathered in some apples together. Now, Jackson went and helped Caryn Chandler (Cha Cha), with the hens.

Looking for a laugh? All you need do is search YouTube for funny hens. Quite often, those videos reveal little kids fleeing from irate hens intent on pecking them. But, Jackson’s not afraid of hens. A real little farm boy, the Little People, Big World star helped herd them and pick them up. Matt Roloff said that Caryn teaches the hens they need to go home to roost.

Jackson helped put the hens to bed ahead of his own bedtime. The video that Matt shared showed his grandson “herding” the hens into a corner so Caryn could pick them up. And, the little fellow managed to catch a couple himself. The LPBW patriarch cheered his grandson on and shouted some instructions.

TLC fans worry about the future of Roloff farms. Since Amy and Matt split, rumors swirled that they might sell off the whole thing. Fans wondered about Zach. After all, he works there. Meanwhile, others feared that Jackson might lose his heritage. Whatever happens, for now, Jackson enjoys farm life to the fullest.

The LPBW grandpa captioned his video of Jackson with, “My tough guy came over to the farm in his jams just before bed time to help Cha Cha.” Caryn tried coaxing the hens, but Jackson helped her out. Matt explained, “True to his rugged farm boy roots…Jackson isn’t afraid to collect the birds and send them to bed … before he turns In for the night. Watch for it.. he’s one talented little fella! Well raised by @toriroloff and @zroloff07 @rolofffarms.”

Fans react to Jackson and the hens

Fans adore Jackson. Small, but brave and stoic, he stole their hearts. One fan commented, “What a lucky little boy to have these lifelong memories. He is also very lucky for you and Cha Cha being such a huge part of his life and including [him] in so much at the farm.” Another fan wrote, “What a cutie…Love that he such a good hands-on kind of boy..💙💙.”

Well, one thing that the LPBW Grandpa need not worry about, is Jackson suffering from “nature deficit disorder.” The New York Times describes it as a medical term for behavioral problems that may stem from too much time indoors. The outlet notes that the coronavirus revealed just how much kids need the outdoors.

My tough guy came over to the farm in his jams just before bed time to help Cha Cha… @carynchandler1 train her birds to go home to roost. True to his rugged farm boy roots…Jackson isn’t afraid to collect the birds and send them to bed … before he turns In for the night. Watch for it.. he’s one talented little fella! Well raised by @toriroloff and @zroloff07 @rolofffarms

Lucky little Jackson spends a lot of his time outside on the farm. LPBW fans love that he gets that opportunity.