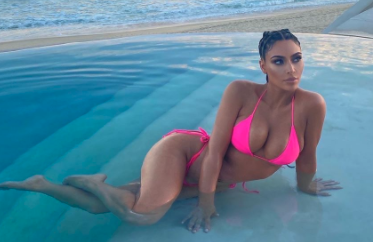 Kanye West has always been one for interesting creative direction. However, this may be taking it to another level. In his new music video, the rapper has his wife Kim Kardashian, give birth to Kylie Jenner. However, the meaning is a lot deeper than it may seem.

Both Kim Kardashian and Kylie Jenner are apart of Kanye’s newest music video includingTyga. However, this isn’t the standard music video. It actually has some deep meaning along with some freaky scenes. The song is called Feel Me and was actually written back in 2017, E! says.

What’s really creating buzz though is one part in particular. Kim Kardashian is seen laying on the ground with her legs spread apart. Kylie Jenner emerges from Kim and walks out of the shadows. The music video is equal parts cool and a little bit strange.

Both sisters will be seen in stellar outfits with unique hair and makeup. Of course, Kanye would never let them in a video looking any less than perfect.

The music video is definitely unique, however, there is some method behind the madness. Turns out, the music video has a deeper meaning than what can be seen on the surface.

While it seems weird, this interesting shot is actually pretty deep and a little bit clever. According to E!, this is actually supposed to symbolize Kylie’s rise to fame. After all, where would Kylie be without Kim Kardashian paving the way for her?

Apparently, part of the video was shot three years ago when the song was created. However, Kylie and Tyga had just broken up, and Tyga is featured on the song. So, they couldn’t use the clips that were filmed.

“It features Kylie coming out of Kim’s vagina,” director Eli Russell Linnetz says. “The metaphorical meaning being that there would be no Kylie without Kim.”

Of course, Kylie has made quite the name for herself in her early 20s. However, Kim is known to be the one that led the way for most of her family to get where they are now. Not to mention, Kim and Kylie could be twins they look so much alike. As a young business owner, it seems Kylie could be a Kim junior.

Do you like the new music video idea from Kanye? Or do you think that Kim Kardashian giving birth to her little sister is weird? Let us know your thoughts in the comments. Come back to TV Shows Ace for more news on the Kardashian family.