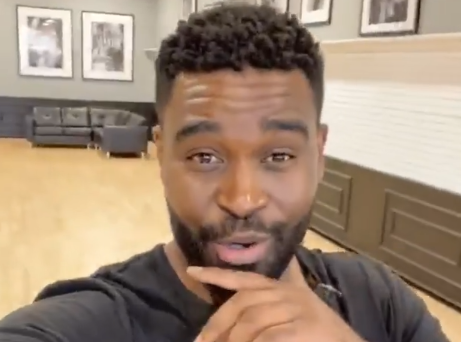 The Dancing With The Stars cast list is out and fans are eager to learn more about the celebrity pairings. Execs warned that this season will look pretty different in order to keep everyone safe from the Coronavirus pandemic. One major change this year is that participants will have to quarantine away from their spouses.

“It’s going to be bliss — I mean it’s going to be terrible,” pro Emma Slater joked with Good Morning America about being separated from her husband and fellow competitor, Sasha Farber. “It’s going to be so different because we can’t actually interact and even prep with each other, which is something completely different, but we’re doing everything we can to keep safe. There’s going to be a lot of FaceTiming.”

However, a few pro dancers aren’t taking the quarantine mandate quite as seriously. Gleb Savchenko and Keo Motsepe enjoyed a recent night out with pals. Troupe member Vlad Kvartin posted several images with the two bros on his Instagram story. Apparently, the three dancers and others gathered together to celebrate Vlad’s birthday.

Fans did not react well. In a new teaser featuring Keo on the Dancing With The Stars Instagram page, fans commented on the pro’s actions.

“He won’t be dancing with anyone if he keeps up the irresponsible behavior,” said one viewer. Many others pointed out that married couples such as Emma and Sasha aren’t even allowed to stay together during the competition season and felt that Keo and Gleb’s behavior was really unfair.

Don't tease us like that! 😩 Any guesses who @keo_motsepe will be dancing with during #DWTS 2020?!

It’s hard to say exactly what will happen now that Keo and Gleb broke quarantine mandates. Executives likely aren’t happy, but no one knows if they will take action or not. It would definitely be unfortunate if either pro came down with the virus so quickly.

What do you think about the situation? Let us know in the comments.

DWTS finally announced the rest of the Season 29 celebrity contestants today. There are definitely some interesting choices, such as Tiger King‘s infamous Carole Baskin. Check out the post on the show’s official Instagram page to see the full list:

We won’t know more about the celebrity pairings until premiere night, however. Who do you think will be paired together? Comment your ideas below. The vast majority of fans believe Kaitlyn Bristowe and Artem Chigvintsev will be partners. They almost competed together back in a prior season, but plans fell through and Kaitlyn had to drop out.

As always, make sure to regularly check back with us. We have all the news you’ve been searching for. TV Shows Ace is excited to keep you filled in and informed!