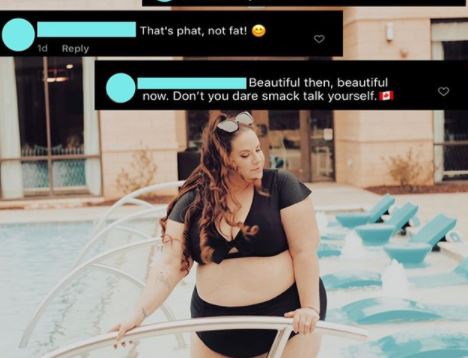 Whitney Way Thore, the star of My Big Fat Fabulous Life, takes to Instagram and tells her fans that she is fat and she accepts it!

Whitney posted a picture a few days ago of her as a child in a swimsuit with the caption “ Can I get this suit in size fat?’’.  Many people took to the comment section, under her post, saying things such as ‘’You are not fat… You are beautiful”. Another comment, just further down a bit, you can see the comment “that’s Phat, not fat’’. Whitney Way Thore did look adorable in the picture you can see down below.

While the comments seemed very heartfelt and encouraging, Whitney decided to post her thoughts on the subject.

Here’s a glimpse into her thoughts

Here is what Whitney Way Thore had to say about it on Instagram now.

“A few days ago I posted a pic from the ‘80s and said I wanted the swimsuit I was wearing in a ‘size fat’ and I got so many comments that I didn’t expect. So here’s just a little reminder that…..

It’s actually insulting to insist that a fat person who identifies as fat actually isn’t fat.

Telling a fat person some variation of. “You’re not fat; you’re beautiful/funny/smart/successful!’ means that you have not reconciled that a person can simultaneously be fat and possess good qualities and be likeable… And that’s a problem.

It’s disrespectful to tell someone that the way they identify is wrong, I personally cringe myself into the ether over words like ‘fluffy’,  ‘chunky’, etc. I don’t need to distance myself from the word fat. I don’t need a euphemism, If it makes you uncomfortable, again, that’s you not me.”

Whitney Way Thore continued down this rabbit hole for a little longer. You can see the point of her post. We all know that Whitney is outspoken, and a little on the opinionated side, but a few people found her post a little harsh.

One person wrote, “Some people are going to think twice before trying to say something nice to you from now on. I get your point but you’ve come across a bit rude in what you said’’. The comments only got worse from there. “ Why do you always feel the need to come at people who try to be nice or compliment you?’’ commented a fan of the show ‘’For someone so accepting of being ‘fat’ you are always rude and defensive! Another show that has run its course.”

Bringing you high fashion since 1988. But seriously, can I get this suit in size fat? 😂

Well, it seems like Whitney may lose some fans over this post, but hey isn’t her outspokenness one of the reasons we love her so much and continue to watch her show? Whitney Way Thore will be back later this year with more My Big Fat Fabulous Life.