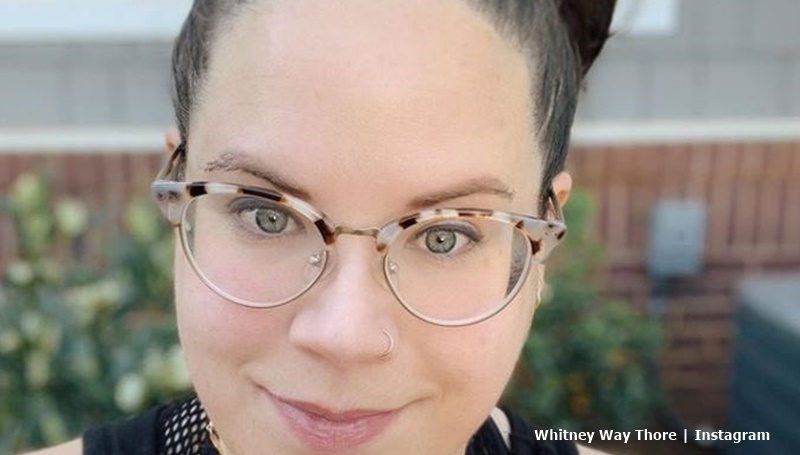 Whitney Way Thore fans adore her as she doesn’t seem so self-conscious about her weight. They feel encouraged as they struggle with their own body image insecurities. Now, they call for a swimsuit line from Whitney and it looks like she’d get a lot of customers.

Whitney Way Thore shares a throwback photo of her 1988 swimsuit

On Wednesday, August 26, Whitney took to her Instagram and shared a throwback photo of herself. She wore a cute swimsuit. And, fans noticed the block cut bangs! Whitney captioned it with, “Bringing you high fashion since 1988. But seriously, can I get this suit in size fat? 😂” Actually, Whitney often refers to herself as “fat.” Not very politically correct, she’s nothing if not a realist. But, she doesn’t ever let it get her down.

We reported in July, that Whitney Way Thore went to the beach. The My Big Fat Fabulous Life star celebrated National Bikini Day by wearing one herself. Her fans loved that she loves her own body and feels confident about herself. Plenty of them admitted they couldn’t do that because they feel shy. When she shared her latest throwback photo some of her fans corrected her and suggested she doesn’t use that word, “fat.”

Fans call for a swimsuit line – comment on the photo

The TLC star wore a swimming suit as a kid that plenty of people recall. Many of them wore the exact same suit when they were kids. Actually, it looks like a best-selling line back in the day. But then, My Big Fat Fabulous Life fans called for a swimsuit line from Whitney. One said, “Maybe a swim line is up next for you? We need this.”

Taking it a step further one of Whitney Way Thore’s fans suggested, “I second this. How about dream big and go with a whole clothing line.” Someone else sounded interested in that as well. They noted, “Animal print never goes out of style. So love it.” Plenty of plus-sized fans follow Whitney and they often comment on her outfits. Now, it seems a swimsuit line or even a whole clothing line would be popular.

Bringing you high fashion since 1988. But seriously, can I get this suit in size fat? 😂

Despite many people in the USA being larger than the average clothing rack, it’s really hard to find plus-sized clothing in retail outlets. Refinery 29 addressed the problem. They reported that “67% of women in the United States are size 14 and up.” But, they remain “unserved” because of the trend for small sizes only.

The outlet also noted that “of the 62,000 specialty stores in the US, only 2,000 of them focus on plus-size women.” Certainly, if Whitney Way Thore marketed plus-sized clothing and swimsuits, there’s a high demand for that. Perhaps she could sell them online? What do you think?  Sound off in the comments below.