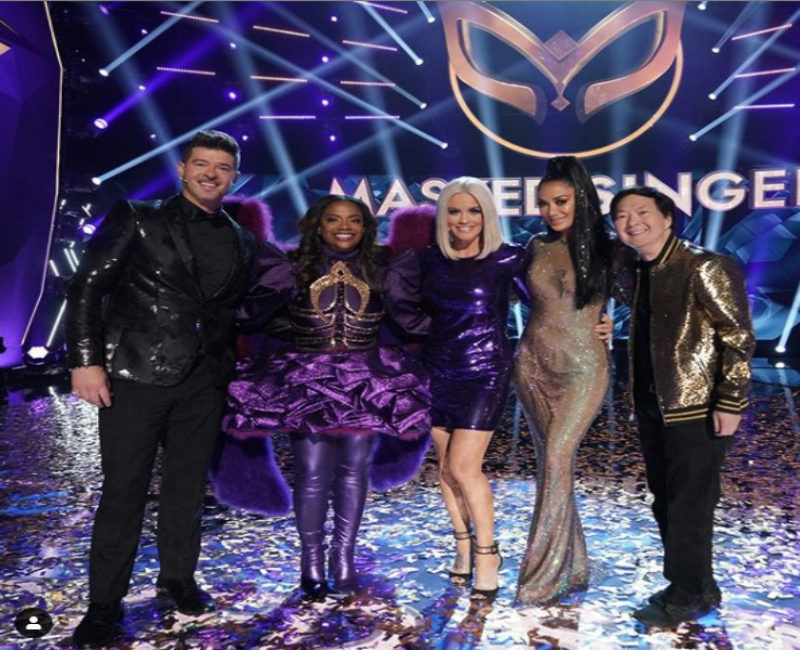 If you have been spending your summer binging ancient television reruns patiently awaiting the return of The Masked Singer — you’re in luck! The show has released an official premiere date for Season Four.  You will never guess what they revealed for the first costume.

The Masked Singer is soon to return. Fox dropped their first teaser trailers this week – goading fans into a frenzy as they tried to guess who might be performing in the newest season. The show essentially revolves around the concept of putting well-known celebs inside ridiculous (and often creepy) costumes and having them perform live on stage… anonymously.  As contestants are booted from the show, fans and judges use their sleuth skills to guess who each celebrity is before they are revealed.

Typical of most networks, Fox has started promoting the popular show’s upcoming season via teaser trailers and channel commercials. The first promo aired Wednesday. The short commercial included a montage of brief costume glimpses and the names of the new characters. While fun and energetic the brief promo did not give fans much to work with in trying to put together possible identities for the new cast.

Fox Tweets Out Exclusive Sneak Peek of ‘The Crocodile’

In addition to the video trailer, Fox revealed a full image of their first character this season via Twitter. The show’s Twitter account, @MaskedSingerFOX, tweeted the pic on Wednesday along with information about the start of the new season. The photo features their new character, ‘The Crocodile’, standing on a stage holding a microphone near his large oversized head.  The elaborate costume includes large scaled ‘skin’ along with a huge oversize bowtie, top hat, and neon green-glowing eyes.  “New Costumes, New Celebrities, New Season,” the post said.  The infographic also told fans the official date of the show’s season four premiere listed as Sept. 23rd.

Anyone can happen on #TheMaskedSinger, premiering Wednesday, September 23 at 8/7c! pic.twitter.com/eYD6ei0WIf

In addition to ‘The Crocodile’, Thursday’s Twitter clip revealed several other new friends coming for Season 4.  ‘Gremlin’, ‘Snow Owl’,  ‘Girraffe’, ‘Broccoli’, ‘Popcorn’, ‘Seahorse’, ‘Jellyfish’, ‘Sun’ and ‘Baby Alien’ are also on the cast roster this year. Fans are already trying to piece together guesses for who might be the participating year.

The new masks are STAR-STUDDED. 👏

The guessing begins in a new season of #TheMaskedSinger, premiering Wednesday, September 23 at 8/7c! pic.twitter.com/gqZrYJOkDj

Keeping It In The Family?

Fans who saw the promo packages may have noticed that a few of the character names sounded a bit familiar. Are old contestants returning? New characters, ‘Whatcha Macallit’, ‘Squiggly Monster’, and ‘Baby Alien’ are theorized by fans to potentially be either returning contestants or relatives of previous contestants. While that would be a fun twist – it could also be just a coincidence.

The Masked Singer Keeps Them Guessing

While neither creators nor returning judges have released any information about the cast – they have revealed that ” “have sold more than 281 million records worldwide, appeared in more than 5,475 episodes of television and 151 films, appeared in five Super Bowls, have four stars on the Hollywood Walk of Fame,” according to Entertainment Tonight.  Big numbers like that leave room for some big-name celebrities to take part — and we can’t wait to see what’s coming. It stands to reason, however, that we will continue to be mystified by each reveal as it happens.

According to Fox, The Masked SingerSeason 4 premiere will hit the air on September 23, 2020.  Additionally, fans can catch an exclusive ‘sneak peek’ live show that will air Sunday, September 13th at 8 pm Eastern Time, nationwide.

Come back to Tv Shows Ace regularly for updates and gossip on all your favorite shows and stars.

Danielle Busby Brags She’s Not A Regular Mom, She’s A ‘Cool Mom’
Chrishell Stause Vacations In Paradise With Her New Man — Who Is It?
Audrey Roloff Blames Pregnancy, Struggles To Support Jeremy’s Endeavor
Meri Brown Gets Cryptic About ‘Being Broken,’ Is She Alright?
‘Sister Wives’ Janelle Brown Admits To “Stalking”?