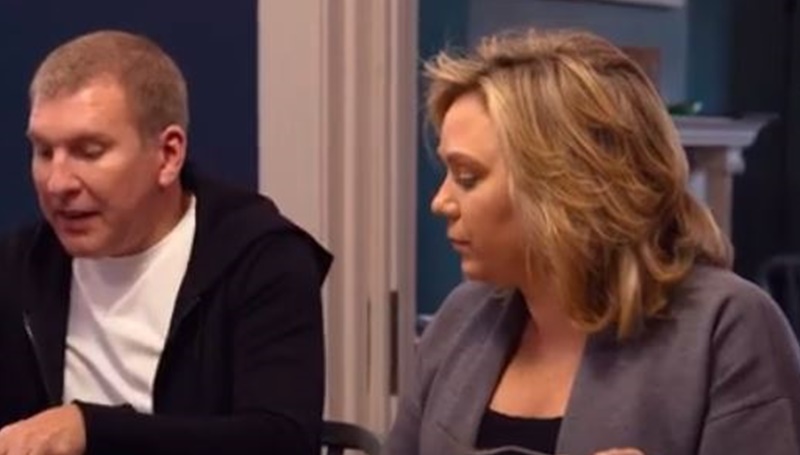 Todd Chrisley and Julie took the latest episode of Chrisley Knows Best to the show’s Instagram. They twinned in a seriously cool Instagram photo. If you watched that August 27 episode on the USA Network show, you’d know it related to Chase and his tattoo removal. But, that doesn’t take any of the “cool” away from their photo.

Mind you, someone always complains. This time, a critic noted, “No disrespect…but Todd looks a little “over-done” with the Botox in the current episodes. I was watching an episode tonight from 3 years ago and he looked so much better.” Hmmm, angling for a famous Todd put down? Todd hates it when people suggest things like facelifts and too much enhancement.

Fans enjoyed the show’s episode that revealed Todd and Julie tricked Chase. Hollywood Life reminds readers that Todd pretended to make a doctor’s appointment for himself. But, he actually made it for Chase. You see, Todd previously agreed that he’d pay for Chase’s car if Chase removed his tattoo. So, when the doctor asked if he’s ready, Chase discovered the unwelcome news that in fact, he was about to undergo the procedure.

Todd Chrisley and Julie got their way, and finally, Chase underwent the laser removal. Mind you, he seemed a bit angry that Todd set him up. And, he looked “furious” that Julie was also in on it. Everyone in the room donned those dark protective glasses. That’s because laser removal can seriously damage your eyes. Fans agreed that somehow, those glasses made Todd and his wife Julie look rather cool.

Fans who watched the episode loved it. One of them commented on Instagram, “Love these guys 😀gotta agree!” Another one noted, “This was hilarious. Great joke on Chase!! It looked painful!!” Then, another fan really enjoyed the funny side of the episode. They wrote, “My favorite show y’all be having me weak.”

Over on Twitter, Chase said that the “Tattoo was definitely the biggest mistake” he made in his life. A fan responded by noting, “Poor @ChrisleyChase and these tattoo removals. They got you again.” Todd Chrisley fans just love it when Chase and his dad trick each other. And, they also laughed a lot because Nanny Faye revealed that she also got a tattoo!

What did you think of Todd and Julie wearing those shades, and looking so cool with them? Sound off your thoughts in the comments below.