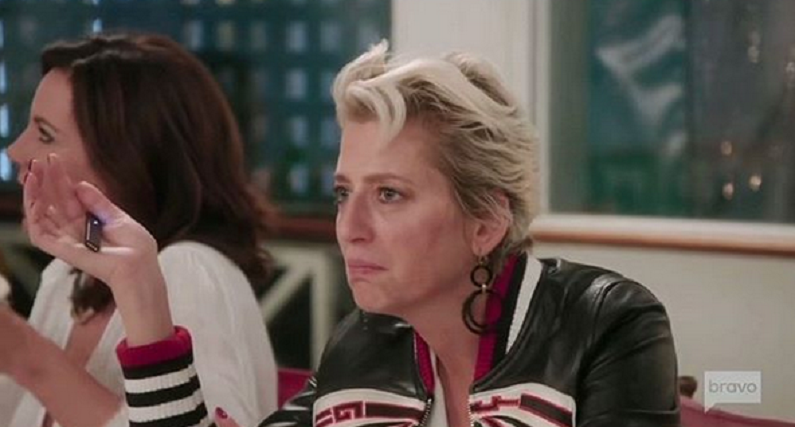 Dorinda Medley made it look as if it was her choice to move on from Bravo. On Tuesday, August 25, the reality star announced her surprising departure from The Real Housewives of New York. Her Instagram post certainly sounded like she was leaving on her own accord. She wrote a heartfelt message to her fans and the cast.

The Bravo star is finally leaving after six seasons. Some RHONY fans feel that Dorinda should take a break from the show. They criticized her for her heavy drinking and mean behavior during Season 12 of RHONY. But did Dorinda really make that decision for herself? Or, was she forced off the show?

Dorinda Medley reportedly fired from RHONY for being a “mean drunk”

According to Page Six, Dorinda Medley didn’t make that decision for herself. Bravo reportedly fired her from The Real Housewives of New York. Her drinking has gone way too far, according to an insider. She was let go from the show because she became a “mean drunk.”

Dorinda was “blindsided” by the news. Dorinda got the shocking call when she filmed an episode of the ABC game show The $100,000 Pyramid. However, other sources told Page Six that Dorinda failed to acknowledge her drunken behavior. If she addressed her behavior during the reunion, she would still have her apple.

Just trying to have a conversation😂 #RHONY tomorrow 9/8c!

“If she’d have said [at the end of the season, ‘Look — I’ve been depressed and that’s why I’m acting like this,’ or ‘I miss my [husband, Richard, who died in 2011]’, and said she’d work on it, I think it would have been different,” a second source said.

Another insider called Dorinda a “mean drunk,” adding, “That’s just not where they want the show to go.” Bravo’s producers don’t want to film another season of her drunken and brash behavior. Instead, they’re looking to diversify the show.

“In this climate of social justice and cancel culture, she was not a good representative of the show or the network,” the insider added.

On Tuesday, Dorinda Medley took to Instagram to announce her exit from the Bravo series. She joined the show during Season 7, which premiered in 2015. Dorinda called the show “a great outlet” following the death of her husband, Richard Medley, back in 2011.

“What a journey this has been. I have laughed and cried and tried to Make it Nice… But all things must come to an end,” Dorinda wrote in the post.

What a journey this has been. I have laughed and cried and tried to Make it Nice… But all things must come to an end. This was a great outlet for me to heal when my late husband Richard passed away. I have met so many interesting people and learned so much about myself, about life and about women along the way. Thank you to Bravo and NBC for the incredible ride and to my cast mates for constant stimulation and entertainment. I wish you all health, happiness and success. Clip! Dorinda

She thanked Bravo, NBC, and her castmates for the “incredible ride” as well as the “constant stimulation and entertainment.” She ended the message with one of her iconic phrases, “Clip!” Dorinda became a fan-favorite and created a cult of dedicated fans. She’s most known for her witty behavior and iconic phrases like, “Make it Nice.”

Dorinda became a full-time cast member in Season 7. Her departure comes off the heels of the Season 12 finale and reunion. She often clashed with her co-stars Luann de Lesseps and Ramona Singer. Luann previously said that she believes Dorinda “shames” her for her alcoholism in order “to make herself feel better” about herself.

Paris Hilton Joining ‘RHOBH’ Would Be ‘Hunky Dory’ With Fans, But Will She? Kathy Spills All
Meri Brown Gets Cryptic About ‘Being Broken,’ Is She Alright?
‘MAFS’ Stars Jessica Studer & Austin Hurd Expecting First Baby
’90 Day Fiance: The Other Way’ Spoilers: Did Ellie & Victor Break Up?!
Adam Busby Gets Crash Course In Water Safety: Are The Quints OK?!