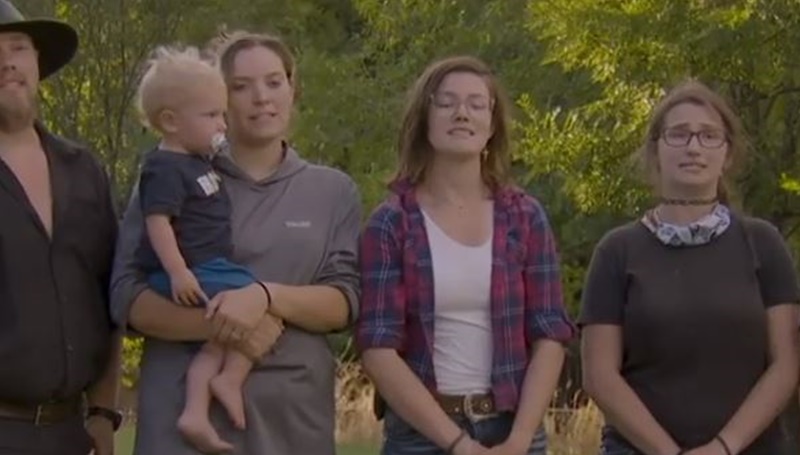 ABP (Alaskan Bush People) fans saw the new season of the Discovery show premiere on Sunday night. It came just days after Bear told his fans a wildfire burned their property. He described it as “devasting.” Now, the family gave an update report.

On Wednesday, Bear took to his Instagram and shared about the wildfire. We reported that he said, “a fire swept through our mountain, our home!” Many fans pleaded with Bear for an update. Many of them worried about the family and their livestock. Bear shared a photo of the burned-out mountain scenery a few days ago. But, he never responded to questions about the animals or the family.

However, the APB star joined Rain, Snowbird, Noah and Rhain Alicia in a video for an update. The video got shared on the official Instagram page for Alaskan Bush People. The video came with the caption, “On August 18, a wildfire broke out near the Brown family’s land. The family is safe, but the fire is still raging.” Unfortunately, they never mentioned if they lost any of their animals in the fire.

Noah asked people to reach out to the community

While Bear assured everyone that the family remains “totally” safe, they pushed for people to assist others. In the caption, they added, “Learn how you can help those fighting wildfire devastation, visit the American Red Cross at redcross.org or call 1-800-RED-CROSS.” In the video, Noah called for awareness and asked for support for those in the community.

The fire still burns in the area. But, at least the Brown family from ABP all survived. One fan replied, “So glad everyone is safe and alright. Y’all don’t deserve any of this .” Another concerned fan commented, “Nooo! Oh sending prayers of protection around the whole crew. May your property, and critters be saved.”

Snowbird seemed grateful that the first responders assisted them. Their fans also thanked them for their help. One said, “Praying for a soaking rain to come and put out all the fires. God bless all those affected. Also all the brave firefighters🙏🙏🙏.” Fans seemed grateful about the update. One said, “Thanks for sharing this and letting us know all is safe 😍.” However, the safety of the critters seems a top question on the Instagram Page.

Sadly, the fact that they avoid answering the questions, might point to at least some bad news. Most likely, in a future season, fans will see the fire take place. Apparently, the Discovery film crew for APB was present on the property at the time of the fire. Some critics who believe the show’s fake see it as an opportunity for a continuation of the show.

On August 18, a wildfire broke out near the Brown family’s land. The family is safe, but the fire is still raging. To learn how you can help those fighting wildfire devastation, visit the American Red Cross at redcross.org or call 1-800-RED-CROSS. #AlaskanBushPeople

Are you relieved that the whole Brown family made it out of the fire safely? Sound off in the comments below.

UPtv’s ‘Love In Whitbrooke’ Takes You To A Romantic Small Town
Katie Thurston Slams Fashion Haters About Her Looks
Fans Think Nathan Bates & Esther Keyes Have A Secret: See Video
Kourtney Kardashian Spills Details On Sweaty Date Night With Travis Barker
Savannah Chrisley Under Fire For Catching A Shark: Did She Release It?