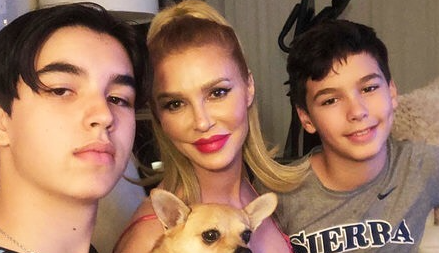 On a recent episode of Real Housewives of Beverly Hills, Brandi Glanville brought receipts. She showed texts from Denise Richards that she believed proved they had more than just a friendly relationship. She and the other women attended a baby shower thrown for Teddi Mellencamp.

Erika Girardi made a comment about the volume of texts as the women passed the phone around. It put some doubt into the heads of those who’d just believed Denise so far. But is it possible, those text messages were fake? Some fans think so.

The texts were a hot topic at the baby shower when Brandi Glanville had the other ladies pass her phone around. Lisa Rinna began questioning if Denise manipulated her. According to The Blast, fans criticized Lisa Rinna for being a bad friend. One said, “you had another chance to defend Denise and again u didn’t. There was nothing nefarious in texts that I saw. Shame on u.”

The Instagram account @bravosnarkside posted a picture of one of the texts from Denise. The text said, “hey Pretty do you want to have a girls day on Wednesday?” It goes on to say Denise doesn’t have the kids and they can hang out. Brandi Glanville replied, “yes would love.”

The text in question drew attention because it looks like another text box is on top of where the actual words were. Twitter user Zoe Logan posted the picture below questioning why it looked like this.

Fans Dissected The Text And Had Mixed Responses

@bravosnarkside posted the tweet on their Instagram. In the caption, they wrote, “Hey Brandi, you got some splanin to do? Why is this txt clearly cut and pasted with a new box? Did Teddi and Kyle help you with this, because that would explain why it’s so poorly faked.”

One fan said it isn’t reliable. They said, “it was the way the producers edited the video for the texts to “pop off” the page.” That same user believes the texts are real and they don’t prove anything.

Others were playing detective asking questions about the number. One said, “did anyone even look to see if the phone number with her name is even Denise’s real number. It could be Kyle’s and Brandi used Denise’s name.”

Brandi Glanville has broken down on Instagram, because people are saying she’s lying. This story is not over. RHOBH airs on Wednesday nights and there’s definitely more drama left to come.