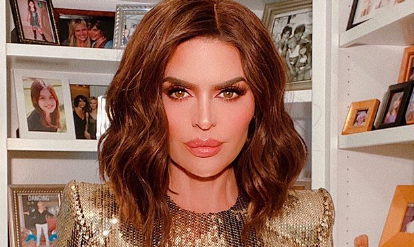 Lisa Rinna doesn’t know about her friendship with RHOBH co-star Denise Richards. Richards has dealt with a lot in the last few episodes. Her main conflict stemmed from Brandi Glanville’s accusations she had an affair with her. On the episode where they went to Rome together, Lisa and Denise had a long conversation about their friendship.

In the most recent episode, Teddi Mellencamp Arroyave got an Italian themed baby shower. Claiming to be sick, Denise called Dorit Kemsley before the party and told her she wouldn’t be there. The women still made time in their gossip session to talk about Brandi Glanville’s accusations. Brandi showed up to the shower and brought it back up again. She said, “I am not trying to hurt this person here in any way, shape or form. In April, I went to visit her on set to do my podcast. She invited me to a movie set. I knew for a 100 percent fact that they had an open thing as long as it was just with girls.”

Lisa Rinna read some of the messages between the two after Teddi said she should hand over her phone and let them see them. Brandi told them they could scroll back as far as they wanted to according to People. Lisa saw one text from 2018 that said, “hey Pretty do you want to have a girls day on Wednesday?” There was allegedly one that said, “just know if we went a year or five without speaking I can always pick up where we left off. My loyalty doesn’t change.” Then another one that said, “I still care and love you.”

Lisa said in a confessional, “I don’t have that relationship with Denise in texts. I don’t say, ‘I love you, honey. I love you, baby.’ This is an intimate friendship.” Erika Girardi said she didn’t look at what the messages said, but their volume. She said scrolling through showed her pages and pages. Brandi got angry and defensive over the fact that Dorit Kemsley didn’t believe her.

Lisa Talked About It With Brandi And Kyle Richards

Lisa Rinna said about the texts, “She’s my good friend, really good friend. But that’s a relationship.” Brandi responded, “I thought she was my friend, too. Until I didn’t.” She went on to say she felt Denise was a master manipulator even more so than LVP. Later Lisa went to Kyle Richards’ house and talked more about it. Lisa said it confused her, because she truly believed Denise when they talked in Rome.

She told Kyle, “Brandi was real convincing, so my heart sunk, to be honest with you.”  She told Kyle, “What if it was all part of the plan? I sound like I’m a conspiracy theorist.” She was referring to her heart-to-heart with Denise in Rome. Lisa told cameras, “it feels like Denise has weaponized our friendship and used everything she can to make me feel guilty.”

This is definitely a she-said, she-said battle that isn’t over yet. The Real Housewives Of Beverly Hills comes on Wednesday nights.