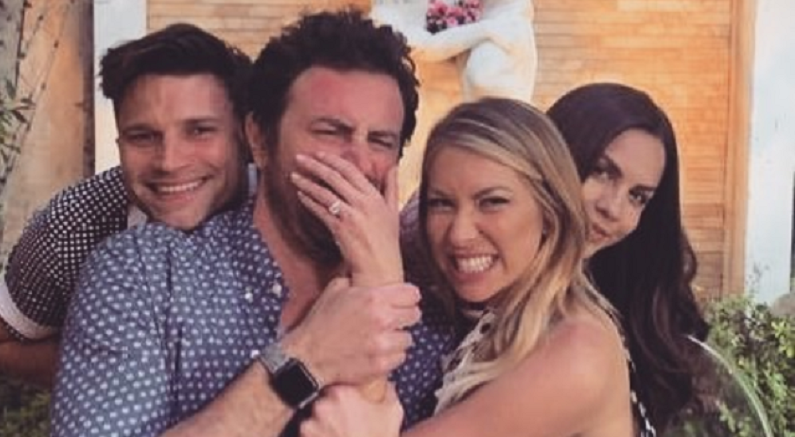 Katie Maloney revealed how Stassi Schroeder and Beau Clark are doing during this time. It was only two months ago when Bravo fired Stassi and Kristen Doute for their past racist comments and actions. The decision came after their former Vanderpump Rules co-star Faith Stowers claimed that both women called the cops on her for a crime she didn’t commit.

Then, Stassi and Beau confirmed that they’re having their first child and it’s a girl. Their life has been up and down ever since. The couple is still dealing with the backlash they received online. But, Katie claims they are “so happy” because of their pregnancy news.

In an exclusive interview with Life & Style, Katie Maloney shared an update on her good friends. She revealed that Stassi Schroeder and Beau Clark are doing well during this time. The couple is just over the moon over their baby news. Beau and Stassi aren’t even thinking about the Bravo firings.

“Obviously she’s really, really excited and doing really well,” Katie told the outlet. “They’re like working on their nursery and anticipating their baby girl being born.”

The “You’re Gonna Love Me” podcast host admits she checks in with Stassi on a regular basis. She wants to know how her longtime friend is doing. Stassi has been through a lot in just the past few months alone. Beau and Stassi even had to postpone their Italian wedding due to the coronavirus pandemic.

“I’ll check in with Stassi like, ‘How are you feeling today? What foods are you craving?'” Katie explained. “Just asking those kinds of questions about you know her pregnancy and you know just in the ways that you are just a friend to somebody.”

Katie is “being there” for Stassi during this milestone. She also wants to be “emotionally or mentally” supportive. Katie admits that the firing “hasn’t become super real” and she hasn’t fully processed it yet. Things will certainly feel real when filming for Vanderpump Rules Season 9 starts.

Katie Maloney will be on her own on the Bravo series. In her interview with Life & Style, she revealed that she’s “just been trying to be supportive of Kristen and Stassi, and their journey now.” The Witches of WeHo may be done on Vanderpump Rules. However, their friendship is far from over.

The three women have met up in recent weeks and worked on repairing their relationship with each other. Now, they want to use their platform for the greater good. Katie said that they’ve been discussing how they can “make a difference” during these ever-changing times.

Lol. Anybody else losing it? 🙃

“I’m having the same conversations I’m having with them that I’m having with all of my friends,” she continued. “Like, what’s going on and how we find our part in all of this and make a difference.”

She revealed that Stassi and Kristen “are actively doing the same thing,” and added that “we’ve all got a lot of work to do.” Fans of Vanderpump Rules would agree as well. In fact, viewers are still calling for the network to do its part by removing Lala Kent and Jax Taylor and his wife Brittany Cartwright.

It’s unclear when the network will start filming Pump Rules. This could give Bravo more time to think about recasting.