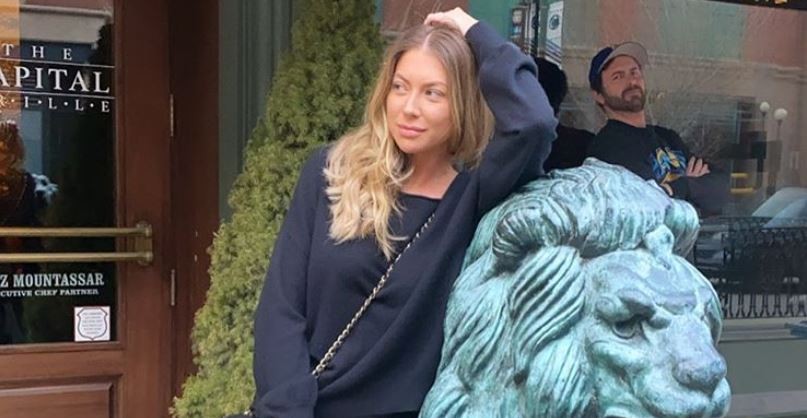 Vanderpump Rules star Katie Maloney is opening up about Stassi Schroeder in a new interview. She spoke exclusively to Us Weekly about her former co-star and best friend. This comes just two months after Bravo fired Stassi Schroeder and Kristen Doute.

A lot has changed since then. Stassi and her fiance Beau Clark confirmed they’re having a baby and it’s a girl. Katie feels that her friend will be a “great mom.”

The Vanderpump Rules star is currently promoting her new “You’re Gonna Love Me” podcast. On Wednesday, August 12, Katie Maloney spoke to Us Weekly about Stassi Schroeder’s journey to motherhood.

“She has such a maternal sort of aspect to her,” the 33-year-old revealed. “She’s really caring and likes to care for people and wants to just have a little mini her. I’m like ‘Oh, my gosh, she’s going to be a little devil.'”

Lol. Anybody else losing it? 🙃

Katie also feels that Stassi and Beau will be “good” as parents. “Stassi definitely has more of the feminine energy and Beau’s a little more rambunctious, so it will be interesting to see like who she takes after more,” she added.

The Bravo star also revealed that the Next Level Basic author “already got, like, a full year’s wardrobe.” Us Weekly previously leaked the information in June that Stassi is pregnant with her first child. Later that same week, the former VPR co-star and the casting director confirmed that they’re having a baby girl.

Katie Maloney is gearing up for her new podcast. The first episode dropped on Friday, August 14 via Dear Media’s podcast network. Katie revealed that she has gotten advice from Stassi, who had her own podcast titled “Straight Up With Stassi.”

“I’ve definitely asked questions,” Katie said. “Her advice was always just like, ‘Find interesting people to talk to you,’ or ‘Ask interesting questions’ or just, ‘Let it just sort of come naturally to you.'”

However, Katie says most of her questions are “technical.” She prefers to have different personalities and people on her show. The reality star went on to exclaim that she’s grateful to be in “such good company with so many really smart and talented voices” at Dear Media.

YOU’RE GONNA LOVE ME IS OUT NOW! There is 2 episodes available now 💃🏻💃🏻 click the link in my bio to listen!

In a separate interview with People, Katie will show a side of herself that people don’t get to see on TV. She wants to use her platform to showcase people who have gone through what she’s gone through. Her first guest was VPR’s controversial cast member James Kennedy.

“I started thinking about other people who are in similar situations, other people who have gone through something publicly and been scrutinized or vilified for things, and understanding that there’s also more to them and we all also judge people,” Katie explained. “We make snap judgments and have opinions of people. That’s just kind of like, the human condition and it’s not necessarily going to go away.”

Katie wanted to start this podcast ever since last year. Since she knows what it’s like to be in the public eye, she wants to uncover things about people that others don’t know about them. She said that the title of her podcast isn’t just about her.

In the interview, Katie Maloney confirmed Season 9 of Vanderpump Rules remains up in the air at the moment.