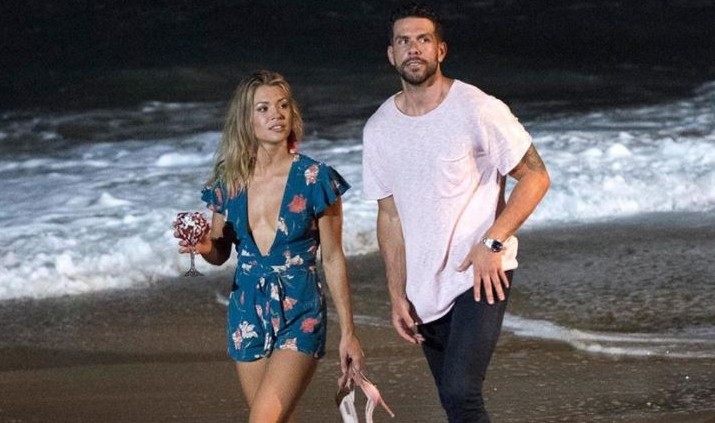 Another first for Bachelor Nation is happening. Fans are seeing the franchise’s first divorce. Bachelor in Paradise couple Chris Randone and Krystal Nielson are divorcing. The announcement comes months after they announced their initial separation. Now, as they move forward, Chris and Krystal are both speaking out about their relationship.

Chris and Krystal are moving on

US Weekly broke the news that Chris received divorce papers from Krystal. He had hoped for a reconciliation, but it looks like that won’t be happening. Chris said, “It’s becoming more real, the separation, which you know, is, you know, obviously turning into a divorce. Just got the paperwork, not too long ago.”

He continued, “It’s a crazy process, even though I’m still legally married, you know, it’s, it’s something that is a memory now. But here’s the interesting thing. I look at this as like a moment of gratitude and I know that’s probably crazy for anyone to hear this, but you know, you always got to come from a place of love and compassion. There are just things in life that you can’t control.”

Before we begin this beautiful wedding, is just like to thank everyone who took time out of their busy lives to come and celebrate. I’d like to thank ABC for supporting our relationship since we got engaged in paradise with always being there for us every single day. I’d like to thank the handlers whom I’ve grown great relationships with them and were always there to help no matter if it were a pedialyte or grabbing my bags. To every producer Todd, Ryan, Megan, Eddie, Peter, Bill, and everyone I’m not naming. Each of you guiding me on a path of really learning about myself which has molded the man I am today. To Elan, thank you for getting the goofy story out of me that began the bachelor path of giving me a chance on the show. To Megan the boss ass bitch of ABC who helped plan this wedding with ease and took all the stress off our shoulders. To Chris for officiating and putting your trust into us to make this beautiful wedding happen. To Becca & Tia, thank you for supporting and being there knowing we didn’t have some good moments in the past but to move forward and show you’re support just shows the type of women you are. To my friends and family, thank you for supporting me and always being there for me whenever I need a phone call, a text, or a shoulder to cry on. Lastly, to my wife, thank you for inspiring me. Thank you for being a strong independent woman I adore. Thank you for having my back. Thank you for being the best friend anyone could have. And thank you for transforming me in the man I am today. This was a moment I’ll never forget. Love, Chris

The couple had only been married less than eight months when they announced their split. They had met on  BIP  in 2018 and were married on the beaches of Mexico last summer. While he admitted to missing her earlier this year, Chris says Krystal has moved on.

Chris is also trying to move on. He says he has no regrets from their relationship. He chooses to focus on himself for the time being. In fact, he just wrote a book, Change Your Mindset, Change Your Energy, Change Your Life. He said, “And like I said, now it’s time to focus on me. I think I had so much energy putting into the relationship that I abandoned myself. And so now, I’m making sure that I’m a priority and I’m going to be focusing on what’s going to help me become better moving forward.”

The past 8 months have not been easy… I’ve been torn between mourning a life that could’ve been… and determined to fight for the future that I know I deserve. With respect and support for one another, Chris and I have decided to move forward with filing for divorce. We are grateful for the events that brought us to find one another, as we have been great teachers on our journey of personal discovery and growth. I believe that there can be beauty inside of pain when we have the courage to look within with compassion and a willingness to grow. We all deserve to live a beautiful life we love… and sometimes we realize it’s time to let go and LET GOD. 🙏 Thank you for the well wishes and continued support. It means the world. ❤️✨

After news broke of their divorce, Krystal went to Instagram to share her thoughts. She shared a picture of her near the water with her two dogs. She said, “The past 8 months have not been easy… I’ve been torn between mourning a life that could’ve been… and determined to fight for the future that I know I deserve. With respect and support for one another, Chris and I have decided to move forward with filing for divorce.”

She went on to talk about her and Chris being grateful for their journey. Krystal said they have both learned a lot from each other. She wrapped up her post saying, “I believe that there can be beauty inside of pain when we have the courage to look within with compassion and a willingness to grow. We all deserve to live a beautiful life we love… and sometimes we realize it’s time to let go and LET GOD. 🙏”