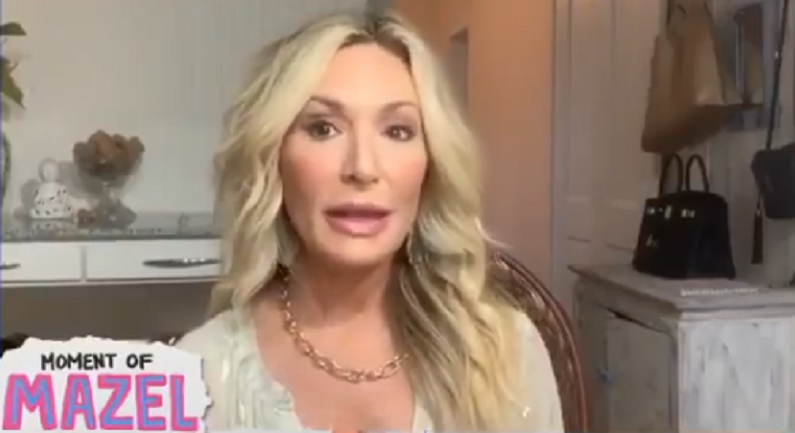 Kate Chastain finally spoke out on Hannah Ferrier’s firing from Below Deck Mediterranean. Fans have been waiting for the Below Deck alum to share her thoughts. She spoke out about the matter on a recent episode of Another Below Deck podcast. From there, she explained why she feels  Captain Sandy Yawn decided to fire the chief stew.

Captain Sandy let go of Hannah after receiving a photo of prescription valium and CBD. Sandy claims she fired Hannah because she thought she posed a safety risk to the boat. But Kate has different thoughts on the matter. She feels if Hannah had registered the prescription it would have been a different matter.

On the Thursday, August 20 episode of the Another Below Deck podcast, Kate Chastain shared her input. She explained that Hannah Ferrier could produce a prescription and registered it, then it would’ve been a different situation. Kate also feels that Sandy let go of Hannah because of her poor work ethic.

“On yachts, you can get fired for your personality if people don’t like you,” Kate explained before joking, “It’s happened to me, hard to believe, I know it was in the early years.”

“But if Hannah was a fantastic chief stew, hard-working, good team player,” she continued. “I think they would have been like, ‘Okay, you have a prescription and you’re such a valuable asset. You did forget to tell us to put it on the ship’s rosters of drugs. But now we will. Thank God we didn’t get caught. Let’s move forward.'”

I’m getting a lot of tweets asking my opinion re: this season of #BelowDeckMed and I’m sorry…im just not comfortable discussing something I wasn’t there for on social media.

I prefer televised full episode commentary. Of the most dramatic episodes. Airing in September pic.twitter.com/8aslydWIx0

Kate explained that Hannah wasn’t a strong chief stew. The Below Deck alum thinks that Hannah “wasn’t that good at her job,” even when she wasn’t on prescription medication. She also called the chief stewardess out for isolating herself from the rest of the group.

“I think if she had presented a prescription, which she did not, and she had been a team player, good at her job, I think she would still be on board,” Kate said. “But it’s just like too many things that were negative.”

As fans know, Kate and Hannah are on the outs. So, Kate has opposing views about the Below Deck Med alum. She claims that Hannah ghosted her several years ago. That’s when she discovered Hannah talked about her behind her back.

Kate Chastain agrees with bosun Malia White and the maritime laws. Kate says that the crew members must log all prescription medication.

“All drugs on board have to be reported on an official log,” Kate explained. “Because otherwise, we’d just be going from country to country with a bunch of drugs on board. That’s called the 80s.”

Kate asserted that it doesn’t matter if the crew member is on the medication or not. The meds need placed in the log book to ensure the crew legally brings the medications from country to country. She compared it to someone getting pulled over in a vehicle with valium without a prescription, then each pill is a felony.

Both Malia and Sandy got backlash for the valium controversy. Below Deck Med viewers believed both ladies were insensitive to mental health and prescription medication. Fans aren’t especially happy with Kate’s take on Hannah’s firing.

‘Scandalous!’ Danielle Busby Teases Blayke & Parker: See Video
‘Love Island USA’: Flo Wants To Be The Only Girl On Will’s Lips
Lisa Rinna Stars In New ‘Days Of Our Lives: Beyond Salem’ For Peacock
See Jinger Vuolo’s SHOCKING Before & After Transformation Photos
Todd Chrisley Reaching Out To His Hurt Child, Which One?