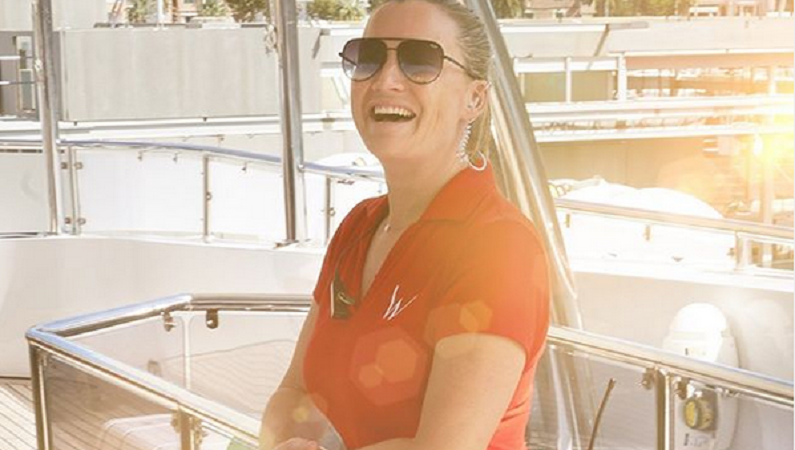 Hannah Ferrier of Below Deck Med fame didn’t like her send-off. The former chief stew just opened up about her departure. On Monday night’s episode, Captain Sandy Yawn fired Hannah. She didn’t feel comfortable having her around after it was brought to her attention that Hannah had unregistered Valium and a CBD pen on board.

Captain Sandy issued an impromptu meeting with Hannah. From there, viewers quickly learned about Hannah’s fate. Bosun Malia White shared a photo of Hannah’s prescription Valium and CBD pen. The episode kicked off with Sandy releasing Hannah from her duties. Hannah opened up about her history-making exit in a new interview.

The Below Deck Med alum discussed her epic walk-off to The Daily Dish. Hannah Ferrier explained why she didn’t like her dismissal.

“It was just really, really disappointing to me,” Hannah said over the phone. “I felt like it got handled really badly.”

If she could go back in time, she would discuss the issue with Captain Sandy before the dismissal. Hannah also said that the viewers “can’t really judge” the situation, even though they slammed Malia for acting like a “snake.” She also wishes that Sandy would have come to her rather than fire her.

“You know, that was my fifth season with Below Deck,” Hannah continued. “So, I was really disappointed in that, but then I also know at the end of the day, she is the captain.”

During the episode, Sandy explained that Hannah’s firing was nothing personal. She revealed that she had a hard time making this decision. Sandy was in such distress that she told Bugsy (in a later scene) that she wanted to leave the boat. But she had to take action due to maritime law’s zero-tolerance policy.

Why was Hannah yawning during her firing?

In an exclusive interview with Decider, Hannah Ferrier explained why she was yawning so much. She broke down everything that happened during that pivotal scene on Below Deck Med. Some viewers think Hannah’s line, “Can I have my Valium please?” is iconic and is forever part of Below Deck history.

Hannah agrees. She also explained why she was yawning so much during that scene.

“Well, when I was watching it with [her boyfriend] Josh, he’s like, ‘Did you just yawn?'” she said. “I’m like, ‘I think I did.’ He’s like, ‘You just yawned in the middle of getting fired for drugs, Hannah.'”

Sooooo – onwards and upwards!!! I am so excited to share with you guys that myself and @nastiasurmava have created a company to help you guys get into the yachting industry. Over the years I have received countless DM’s asking how to get into the industry and now we are here to teach you!! Click the link in my bio to sign up to our updates and I can’t wait to share more info with you soon!! @oceaninttrainingacademy #belowdeckmed

She joked that Sandy was “kind of boring” her. The yachty just wanted to move on with her life. However, Hannah’s yawn could be a sign of anxiety. When a person is overly anxious, the adrenaline system works overtime, which leads to the feeling of breathlessness, according to Medical News Today.

The person often reacts to unpleasant news by yawning, as they become more anxious.

“Nervous people will definitely yawn more,” Robert Provine, a University of Maryland, Baltimore County, neuroscientist previously said in an interview with Wired. “But there haven’t been a lot of formal studies investigating why.”

Regardless, Hannah’s walk-off was a historic moment in the show’s franchise. Never has a chief stew been fired or quit until Monday night’s episode.