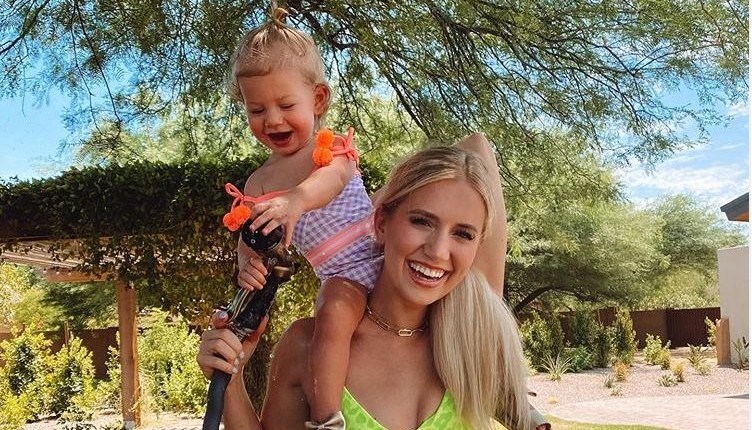 Former Bachelor Arie Luyendyk Jr. and wife Lauren have been on the fence about trying for baby number two. Lauren suffered a miscarriage a few months ago and is finally in a better place. In fact, she is sharing that she and Arie are ready to try again.

Lauren and Arie are trying for baby number two

In a recent interview with US Weekly, Lauren shared that after just three months, she and Arie are trying again. In fact, they have been trying for two months now. Originally they weren’t sure they were ready, but now they believe they are.

Lauren said, “This will be our second month [of trying]. I was always afraid that it wouldn’t work. I think that’s kind of a valid fear if you’ve gone through something like that or just a fear of having to go through it again. So that’s scary, but you can’t really think of all the scary things you just have to move on.”

They’ve been slightly hesitant about a new addition

In a past interview, Lauren admitted she is hesitant about adding a new baby. She always wondered how she could love another child as much as their daughter.

She said, “I’m honestly scared. Sometimes I’m like, ‘OK, yes, we can do this. It’s going to be great. Alessi needs a playmate.’ And then other times, I’m sitting there, like, ‘Oh my gosh, how am I ever going to manage doing everything I’m doing now with another baby?’ So I think I just have to jump in head first!”

Lauren also said, “I think now I’m in a place of peace with it. I feel positive about the future, and I always want to be open with everyone and I think that by doing that, you can help a lot of people. … I did see a huge response from people that were like, ‘I share a story very similar to that, you helped me so much so thank you for sharing.’ And I don’t think it’s something that should be taboo and people should be afraid to talk about. So I always try and make an effort to talk about the uncomfortable thing.”

K I’M WAY TOO EXCITED AND COULDN’T WAIT ANY LONGER…@shadesofrose is NOW LIVE!✨🎉

Along with trying to expand their family, Lauren just launched a new label this week. Her new line is called Shades of Rose. And, Lauren wants everyone to know her name choice is not about The Bachelor. She said, “The name, Shades of Rose, lends to that. I don’t want people to think it has anything to do with The Bachelor, because it doesn’t, It’s not a flower rose, it’s the color rose. For me, that symbolizes femininity and the shades part of that is just, like, embracing every different shade of who you are. I want people to see the brand as inspiration to embrace themselves, whether they are a different race, different sexuality or have different beliefs. I want it to be all-encompassing.”

She also admitted to being very emotional about it all. Lauren has been working on the project for a long time and says it is very surreal. It’s a beautiful line and a glimpse can be seen on her Instagram.