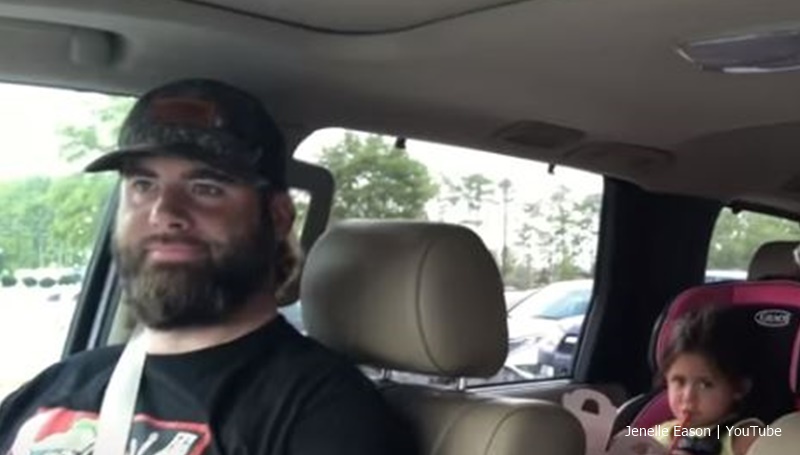 Teen Mom alum David Eason allegedly attacked Jenelle’s friend James Spivey with a gun back in June. Jenelle left him briefly and then returned almost immediately and they reconciled yet again. David got charged with the alleged assault. But now, the charges got dropped.

In June, we reported Spivey alleged David attacked him with a gun. He didn’t try and shoot Jenelle’s friend, but allegedly “pistol-whipped” him. Apparently, Jenelle wasn’t at home at the time. James Spivey filed charges and David ended up arrested.  According to Spivey, David threatened to “blow” his “f**king brains out.”

But it looks like the Teen Mom alum landed on his feet this time, as the charges got dropped. The Sun reported that Spivey and David never appeared at the hearing but their lawyers attended. The outlet noted that Columbus County Court in North Carolina confirmed the end of the case. They said, “the assault with a deadly weapon and communicating threats charges” got dropped on “August 11.”

Why did Spivey drop the charges against David Eason?

According to The Sun, Spivey didn’t choose to drop the charges against David. He told them that the decision came from lawyers. The outlet spoke to Spivey in an exclusive interview. He just said that the “[attorneys] thought it was the best way to proceed. It is what it is.” That’s rather interesting, but not all the details as to why emerged.

However, it’s interesting to note that The Ashley’s Reality Roundup gave more details on the case. In their article, they noted that David alleged Spivey “whacked him with a railroad spike coat rack.” The Teen Mom alum filed counter charges of assault against James. The outlet added, “Both parties agreed to drop the charges against each other, and also agreed that they would have no contact at all.”

James Spivey plans on staying well away from Jenelle and David

Like many of Jenelle’s followers, Spivey feels no matter what, they seem “meant to be together. Through thick and thin, highs and lows.” But, he added, “[they] deserve to marinate in their own sauce.” Spivey rejects the idea of any reconciliation. In fact, he said that he wants nothing to do with Jenelle in future.

Beyond retrieval, the ex Teen Mom friend said that he “learned a lesson” from it all. Never again will he “help a friend in need.” In the meantime, neither Jenelle nor David said anything on their Instagram accounts. None of their loyal fans discuss it either. Jenelle and David still attract many loyal fans who felt MTV did badly by them. They just like that the couple makes an effort with the kids.

What do you think about the attorneys dropping charges? Sound off in the comments below.