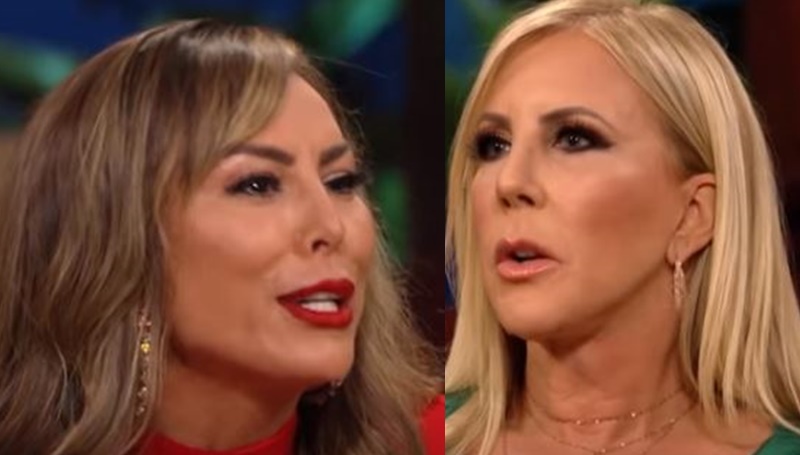 RHOC alum, Vicki Gunvason, and Tamra Judge ignited a major feud with Kelly Dodd over the weekend. Of course, it’s not the first time that these ladies clashed. Fans might think that after Vicki left the show, that sort of drama ended. But, the two women slap at each other now. And, Vicki just heightened the new feud by calling her a “gold digger.”

RHOC – how the latest feud between Vicki and Kelly Dodd started

We reported that “over the weekend, Tamra and Vicki met up at OC eatery Trevor’s at the Track for their post-COVID reunion.” They got to talking about The Real Housewives of Orange County. In fact, at one stage, LeeAnn Locken from the Dallas franchise of the Bravo show joined in on the chat. Well, ultimately, they all shaded Season 15 of the RHOC.

In fact, Vicki said that “maybe there’s no content because they’re all fake b*tches!” Well, you don’t say something like that and not expect a response from Kelly Dodd. Predictably, the RHOC star shaded Vicki back. She told her, “Don’t be jelly, sister.” Furthermore, Kelly felt Season 15 looks to be the “best season yet.” Then she put the boot in, saying that Vicki brought “fake bullsh*t” to the show.

After all the new drama came out between The Real Housewives of Orange County personalities, Vicki took it a step further. Celeb Magazine interviewed Vicki about it. There, she didn’t hold back much at all. First up, Vicki denied she ever faked anything on the show. Next, she listed all the things fans saw over the years. None of it got “faked,” she claimed.

But, she claimed that Kelly never really ever did anything “real.” Then, she referred to Kelly Dodd’s “water business.” Even that, Vicki pointed out could be a fake. The RHOC alum noted, “no one believes she even owns [the water business].” Plus, she hopes that the Bravo show turns out as good as Kelly believes.

Then came the kicker: “because if it’s not, she has nothing to fall back on, as gold-digging certainly is not a career.” Ouch! Making it even worse, when Vicki shared about the article via her Instagram,  she said, “Gold Digger Dodd needs to SHUT UP!”

Unfortunately, Vicki Gunvalson disabled the comments on that post. Meanwhile, if Kelly’s water business is real, it’s not getting a lot of love from fans. On Tuesday, she shared a promo of Positive Beverages’ Prickly Pear Lemonade. One RHOC fan wrote, “Just tried it and it’s horrible. Sorry, Kelly. I literally gagged.”

Then, another one commented, “Sorry…Positive Beverage doesn’t taste good!” Meanwhile, another one said they avoid anything Kelly works at. It seems that Kelly gets slammed from all over the place at the moment.