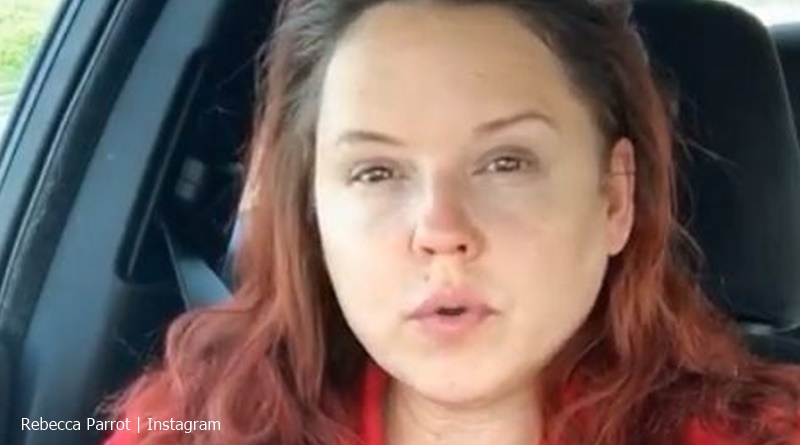 90 Day Fiance star Rebecca Parrot usually looks very well made up. And, more often than not, she wears a big smile. But this Monday, she shared a video on Instagram that showed her looking really irritated, harassed, and uncharacteristically unhappy. In fact, she said to her fans,
“Y’all pray for me that I don’t kill someone.” So, what’s up with Rebecca?

We reported in mid-July, that Rebecca seemed really down. Many fans expressed their concern for her. She told them she felt very unwell. It came when she told her fans that she felt terribly ill. In fact, she felt so unwell she volunteered for a coronavirus test. It seems she never actually got the virus as she never confirmed that. But, whatever she suffered from kept her feeling bad for a number of days.

Almost exactly a month later, Rebecca looks very down again. In fact, the extent of her feelings even goes as far as apparently not spending too much time with the usual immaculate makeup.  In fact, on her Instagram in the comments section, quite a few 90 Day fiance fans told Rebecca that no matter what, she shouldn’t neglect her makeup.

‘Y’all Pray For Me That I Don’t Kill Someone’

Fans know Rebecca sometimes comes over as emotional. Recall, she and Zied argued in the desert. He took off on his four-wheeler while she dissolved into tears. Well, it turns out that Rebecca quit smoking, and that’s why she seems so flustered and angry.

The 90 Day Fiance star’s caption read, “I’m a mess. I quit smoking today. Cold turkey. Y’all pray for me that I don’t kill someone 😭.” Now, unless you ever stopped smoking, or attempted it, you might not understand her deep frustration, anger and emotion. Actually, Heart Org USA notes that “Nicotine is addictive – reportedly as addictive as cocaine or heroin.”

How hard is it to quit cold turkey?

In the video, the TLC star sounds very distressed. So, will she succeed quitting smoking by going cold turkey? In her hashtags, she wrote, “#Helpme.” Well, these days, it’s recognized that quitting needs support. The Heart Orgwebsite says, “People need to focus on behavioral change … they need the right skills and knowledge and social support.”

Additionally, the site suggests “support groups.” While Rebecca calls for support on her Instagram, it might not be enough. Stopping suddenly might bring a “roller-coaster ride of not feeling well and being irritable and having cravings.” Then, just when it starts feeling better, the cravings come back all over again. One 90 Day Fiance fan suggested she gets a nicotine patch. Rebecca replied, saying that she’s trying it right now.

Do you know any tips and tricks that might help Rebecca stay with her determination to quit smoking? Sound off in the comments below.