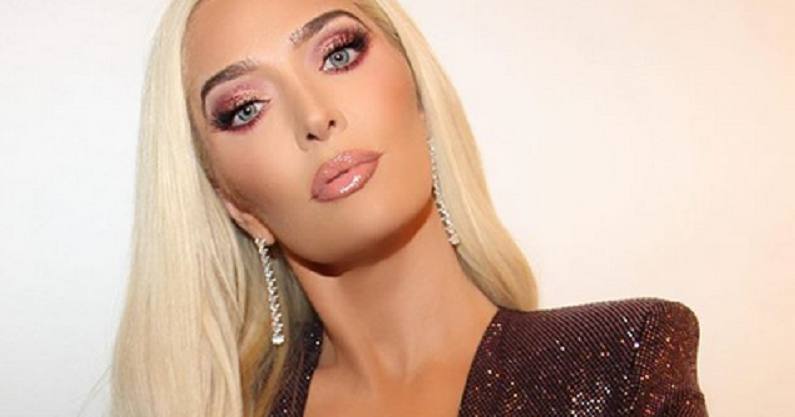 Erika Jayne’s new selfie has RHOBH fans confused. They claim that she looks unrecognizable in her Instagram post. The 49-year-old entertainer showed off her new “golden” look on Friday, August 14. But her fans were confused.

If you take a look at her Instagram account, you’ll notice that she takes most of her photos from an angle. However, her new photo was taken head-on. So, it makes sense as to why fans would think she looks different. But that hasn’t stopped some from wondering what she’s done to her face lately.

Erika doesn’t like to answer questions about plastic surgery. She would rather share her looks without the comments.

Erika Jayne posted a striking photo of herself literally glowing. In the photo, she wears nothing but a white bathrobe. Erika also has on a full face of makeup complete with fake eyelashes, nude lipstick, and bronzer. She captioned the photo by writing, “Golden.”

The RHOBH star gave a doe-eyed expression to the camera. She snapped the selfie while sitting her makeup chair. Her good friend Lisa Rinna shared her support with a series of fire emojis. However, not everyone appreciated Erika’s new look. Some of them said that her makeup transformation made them “cringe.” Others claimed that they didn’t recognize her.

“Whose face is that?” one follower wrote.

“What did you do you to your face?” another user asked. “You look so different!”

“I actually cringed when I saw this pic,” one hater said. “Doesn’t look like her.”

Some accused her of getting too much plastic surgery, while others said her new look is from “too much filter.” The troll told the singer to “be original and unfiltered.” But there were some who defended Erika Jayne.

“Stunning” one person wrote. “She’s almost 50. Let her live,” another added. “Leave her alone. If you don’t like her, get off her page. You’re beautiful, Erika,” a third user commented.

Erika didn’t respond to the backlash. Instead, she followed up with another glam look. This time around, she wore her blonde hair in a high ponytail. She also had on a black mesh bodysuit, gold hoop earrings, and silver necklaces. This time around, fans praised for her “gorgeous” and “pretty” new look.

The RHOBH star is not a fan favorite this season. They didn’t like it when she fired back at Denise Richards. As TV Shows Ace previously reported, she shared a “Mean Girls” post, referring to Denise’s comments on the show. Posting a headline reading, “Real Housewives of Beverly Hills is Once Again #1 In Cable Primetime.”

Using Denise’s words against her, Erika threw shade. “Mean Girls’ stand UP!” she wrote in the caption. But fans thought her post was in bad taste. On Wednesday night’s episode, Denise called the group of women “mean girls” and claim she felt “attacked” after they asked her about Brandi Glanville’s allegations the two hooked up.

“Mean Girls” stand UP! ( they leaned in … deal with it) Special recognition goes to Denise’s boot cut jeans. Solid player. ☝🏻