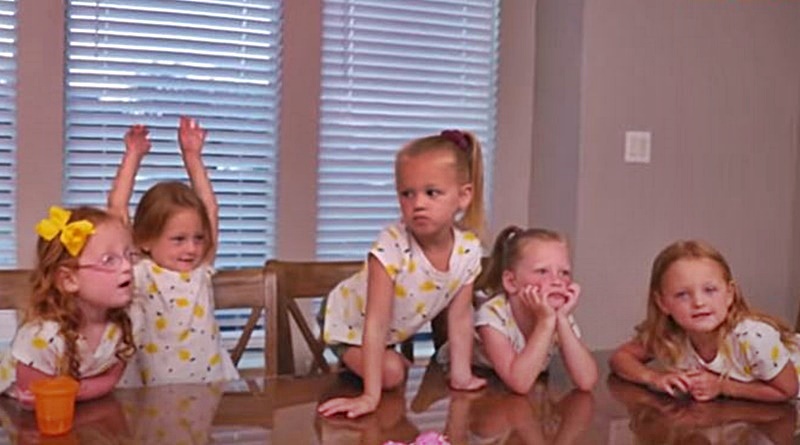 OutDaughtered quint Parker Kate gets described by Adam and Danielle as very much a “daddy’s girl.” Clearly, Adam and Parker share a very special bond. After all, he put in a huge effort helping her to get over her crippling anxiety. Now, fans try and figure out how many of the kids seem more like “mommy’s girls.”

OutDaughtered mom Danielle melted when Parker said she likes her

Almost every family with more than one kid hears at some stage that the kids think their parents have favorites. Well, it also works the other way around. Often, kids developed a special bond with one parent. That doesn’t mean they hate the other parent at all. Danielle said that her heart melted the other day when Parker said something nice to her. We reported that Danielle shared a photo of herself in the pool with Parker.

The quint said, that her mom was her “best friend.” Danielle noted, “For a split second my PK told me she was 👉🏻MY 👈🏻 best friend …warmed my heart so much 💕…even if she followed it up with a “daddy too” …it still stole my heart!'” Now, the OutDaughtered dad shared some photos of himself with Ava Lane, one of the twins. They both cuddled up on the couch making funny faces. That got fans thinking about mom and daddy girls.

Adam Busby captioned his post with, “Cherish every second that this little mommy’s girl wants to climb in my lap and cuddle.” Okay, so fans know that Ava’s a mommy’s girl and Parker is a daddy’s girl. In the comments section of the post, most fans agreed that Riley isn’t one or the other. The bright and independent young girl seems equally at home with both Adam and Danielle.

So, that leaves four others in the OutDaughtered family kids for fans to wonder about. If you don’t know, the Busby kids include the quints, Parker, Ava, Olivia, Hazel, and Riley. Then there’s Blayke, their older sister. Blayke grows into a beautiful young woman and is the spitting image of Danielle. In fact, when Danielle and Blayke take their special tea time treats together, it’s obvious, she aligns herself more with mommy.

What about Hazel and Olivia?

So far, fans surmised that Danielle got an edge on Adam with both Ava and Blayke being mommy’s girls. Riley likes both of them. But what about Adam? He’s already got the heart of Parker. Fans decided that the daddy’s girls also include Olivia and Hazel. So, as far as Outdaughtered fans go, Adam takes the win for now. However, according to the Institute for Family Studies, as they get older, “both sons and daughters generally say they feel closer to their mothers and find it easier to talk to her, especially about anything personal.”

Cherish every second that this little mommy’s girl wants to climb in my lap and cuddle. #itsabuzzworld #dadofgirls #girldad #AvaLane

Another rather interesting point the site raises is that girls with no brothers who started out as daddy’s girls, “are overly represented among the world’s political leaders.” Maybe one day Parker, Olivia or Hazel becomes the president of the USA.