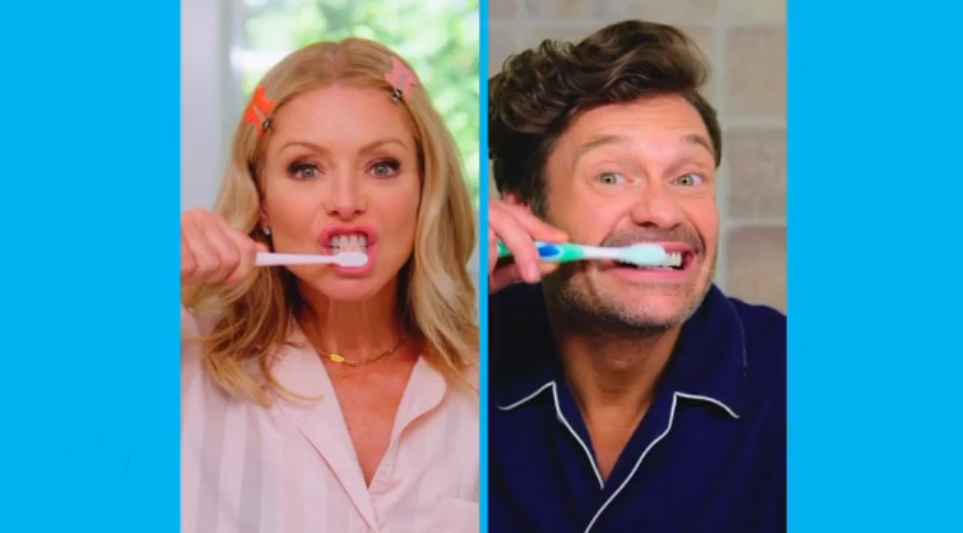 The ongoing coronavirus pandemic has led to talk show hosts working from home. Let’s face it, many are starting to look positively shaggy! Good examples are Stephen Colbert with his waves and Trevor Noah’s developing afro. Meanwhile, Kelly Ripa of Live With Kelly and Ryan claps back at an Instagram follower on Monday. This is after the commenter accuses the hosts of displaying a “lack of personal grooming” on their morning show.

Live With Kelly and Ryan from home is a challenge

On Monday, Kelly Ripa shares a promotional video on Instagram. This is relating to the upcoming season of Live With Kelly and Ryan. In the clip, the pair is seen waking up, brushing their teeth, and getting ready for the latest broadcast. Kelly captions the clip, writing that she swears she doesn’t actually brush her teeth like that! Moreover, she reminds fans that “#KellyandRyan returns this fall!” To most fans of the ABC talk show hosts, this is positively cute and they both look great.

However, haters gotta hate. One Instagram follower can’t wait to rip Kelly and Ryan for their appearance. In fact, they write that the only issue they have with the show is the “lack of personal grooming.” The user apparently watches the show daily as they are at home nowadays. However, they say it is “a nationally televised show.” Moreover, the user writes that they have to get dressed for every Zoom work call, asking, “Why can’t you guys.”

Ripa quickly responds to the hater, writing, “We are dressed. FCC rules, not mine.” She makes a second comment to the effect that she’ll bring it up at the next meeting. Comments have since been limited, so further responses cannot be seen.

This isn’t the first time Kelly has fielded criticism over her appearance while working from home in the pandemic. Back in May, viewers accused Ripa and Seacrest of looking shiny from doing their own makeup at home. Kelly responds, pointing out that certain things don’t matter anymore during the pandemic. She says her appearance is “one of those things that just don’t matter.”

Kelly goes on to rip into the haters. “First of all, let me just say, to people commenting about our appearance.” She says, “How dare you and you’re lucky that we actually put clothes on.” Ripa goes on to write that it is harder than you think to “roll out of bed and come to a TV show.”

Kelly continues by saying viewers will never see her host the show from her bed. She says she keeps telling herself that she is a professional. Ripa wrote, “This is still a TV show and the days matter.” As noted by People, she stressed that this is her mantra.

Since the start of the coronavirus pandemic, Ripa has been open about having to do her own hair and makeup while working from home. She has mentioned cutting her hair with the kitchen scissors and touching up her gray roots. She also filches from her 19-year-old daughter, Lola Consuelos’ makeup arsenal for her glam. In April, she mentioned using Lola’s self-tanner, believing this could help.

Kelly stresses that all her clothing, hair products and makeup are locked in the studio, which is closed up right now. She adds that she realizes what a blessing it was to have somewhere to keep everything.

Live With Kelly and Ryan fans surely have no problem with the way their favorite talk show hosts look these days and look forward to seeing the show again in the Fall.

‘Storage Wars’: Brandi Passante, Jarrod Schulz Reunite at Auction
Wait, Does Danielle Busby Want To Join ‘Real Housewives’?
‘The Young And The Restless’ Hunter King Gets A ‘Chop Chop’
Kelley Flanagan Sends Message To A F***boy But Which One?
Do The ‘OutDaughtered’ Quints Have Different Friends?