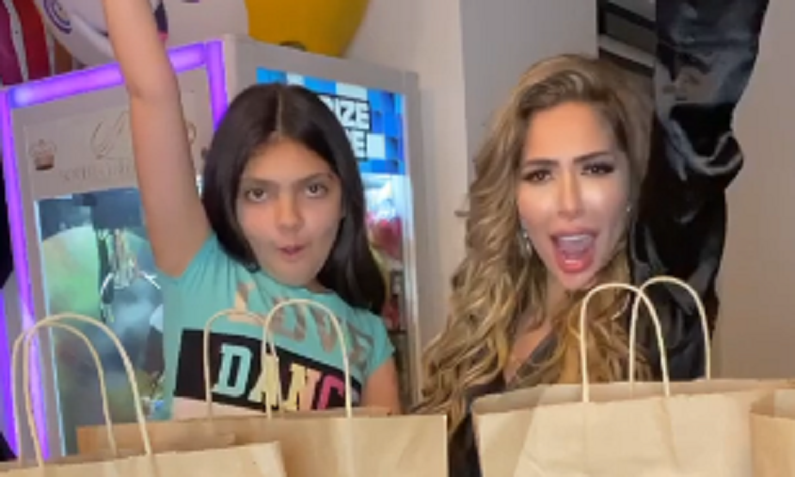 Farrah Abraham is responding to haters concerned about the well-being of her daughter, Sophia. The Teen Mom alum can never avoid criticism over her parenting. Ever since MTV fired her, it seems like she’s making more headlines than ever. The 29-year-old always incites reaction, no matter what she does online.

As TV Shows Ace previously reported, Farrah caught heat for filming inappropriate videos with her 11-year-old daughter. Now, her followers are wondering if Sophia ever hangs out with other children her age. She’s always with her famous mom. Sophia even attended one of Farrah’s Botox appointments. But Farrah has a good reason why Sophia isn’t with her friends during this time.

The Teen Mom OG star slammed a hater who brought up her daughter, as per In Touch Weekly. The user wanted to know why Sophia Abraham doesn’t hang out with any other children her own age.

It all started on Monday, August 10, when Farrah Abraham uploaded a video of herself surprising her daughter with a Hello Kitty mirror. Sophia looked delighted to receive the gift.

“Does that child have ANY friends?” the Instagram user asked. “Would love to see her play like a normal kid with other kids.”

“Clearly she does!” Farrah shot back in the comments section. “P.s. Covid, a pandemic is going on! Wow.”

However, this isn’t the first time that Farrah’s followers have questioned her parenting skills. She recently received backlash for allowing the preteen to have long nails. Earlier this month, Farrah took to Instagram to show off Sophia’s black and gold manicure. Most of her followers felt that her daughter is much too young to have fake nails.

In the past, the former MTV star has been honest about not restricting her child’s clothing and cosmetic choices. She wants Sophia to discover herself and to express who she is.

“She knows I don’t judge her like the world may,” Farrah wrote in a previous Instagram post. “I embrace her fun clothing, beauty, hair, health, and many more trends so she can explore and find her true self.”

Farrah has no intention to restrict Sophia’s appearances anytime soon. Also, the critics will never get her to change her mind.

Sophia’s “becoming of age” is important to Farrah

In a previous interview with In Touch Weekly, Farrah Abraham revealed her decision to allow Sophia to get the manicure.

“Allowing Sophia to be creative in her art and discovery of beauty is nothing to be ashamed of,” the reality star explained.

Farrah revealed that Sophia “long and designed for the first time a year a half ago in Singapore at the notable Marina Bay Sands [hotel].” For Farrah, it’s important to “learn about nail health and safety” after she almost had a “near-death experience” at a nail salon. She doesn’t want the same to happen to Sophia.

Farrah also wants the “shaming” to end, since it can have a devastating effect on children. Since she’s constantly the target of online bullies, she now wants to focus on “lifting up other women.” She didn’t reveal her details, but she “wants to make the world a better place.”