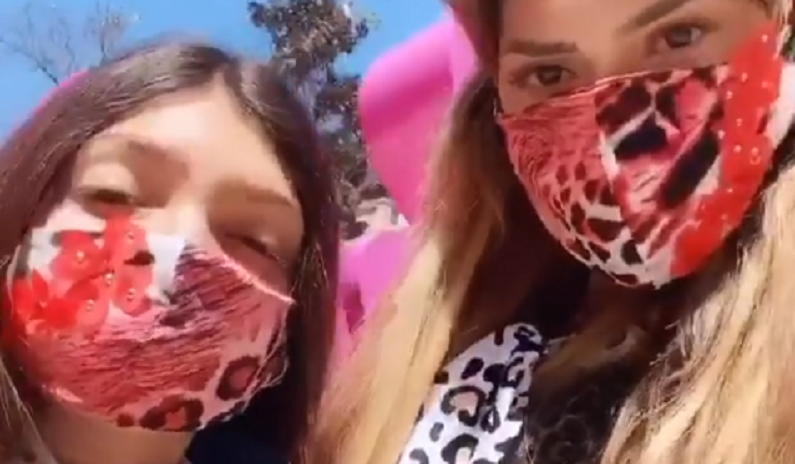 Farrah Abraham created a new TikTok video with her daughter Sophia Abraham. Followers blasted the MTV reality star for wearing just a bra in the video. This comes after Farrah posted a series of inappropriate social media videos with her daughter in full view.

Followers are concerned about Sophia’s well-being. They feel that she’s not in the best of hands. While it’s been two years since Farrah Abraham was fired from Teen Mom, she’s still causing controversy. The former reality star makes headlines for her questionable parenting style. More of her followers have expressed concern over her 11-year-old daughter, Sophia Abraham.

The Teen Mom OG star doesn’t care about the criticism she receives. Since she receives negative feedback on a daily basis, Farrah Abraham feels a need to personally respond to it. A recent example of that is from a TikTok video that she posted on Instagram. According to the International Business Times, the video shows Sophia dancing to Megan The Stallion’s hit son, “Savage.”

Farrah dances along in her seat while lip-syncing along to the lyrics. She shows off her dog that is dyed pink. Farrah also wears an outfit matching Sophia’s aside from her shirt, which is tied around her neck. Her outfit shows off her white bra.

What’s Happening ?!?! 🤣 #nsfw @mtv @teenmom I can’t help it this ones for you … funny how it’s all good now as it should of been day 1 #irony #savage fab fashion by @reindersjm follow @booandcupcake

“What’s Happening ?!?! #nsfw @mtv @teenmom I can’t help it this ones [sic] for you,” Farrah Abraham wrote in the caption. “funny how it’s all good now as it should of [sic] been day #irony #savage fab fashion by @reindersjm follow @booandcupcake.”

Farrah’s video immediately received negative criticism. She noticed one follower ask her why she wasn’t wearing a shirt in the video. “Why must you take off your shirt? That little girl is watching every move you make,” the follower wrote. “This video could have been cute had you just worn the shirt. There is a time and a place for that.”

Farrah slammed the online troll. She responded that she was wearing a shirt, just not in the traditional way. “I’m wearing a shirt & a bra in case your [sic] blinded by your hate,” she responded. Despite her response, many followers felt that the video was inappropriate, given the fact that her daughter was around. They felt the song they danced to was inappropriate due to its lyrical content.

Followers accuse Farrah Abraham of being a bad mother

The hate didn’t stop here. Farrah Abraham continued to receive comments over her attire, as per Showbiz Cheat Sheet. Some accused her of showing off her cleavage. Others wrote that Sophia would need “therapy” for Farrah’s parenting style. They accused of her of needing to take off her clothing in order to get attention.

ALL NEW REACTION SERIES ! Our craziest scenes on MTV TEEN MOM – THEN & NOW 🤭🤣😂 WHAT SCENE SHOULD WE DO NEXT ? Comment on the YouTube video 🚨📲 https://youtu.be/UnilfAke_JQ

While we shouldn’t excuse what Farrah say or does, some say she’s free to wear whatever she wants. Some of her followers argued that her outfit looked like a workout outfit. They feel that if she wants to dance in her sports bra, then that’s her prerogative.

What are your thoughts? Do you think that Farrah Abraham’s video was inappropriate? Sound off below in the comments section.