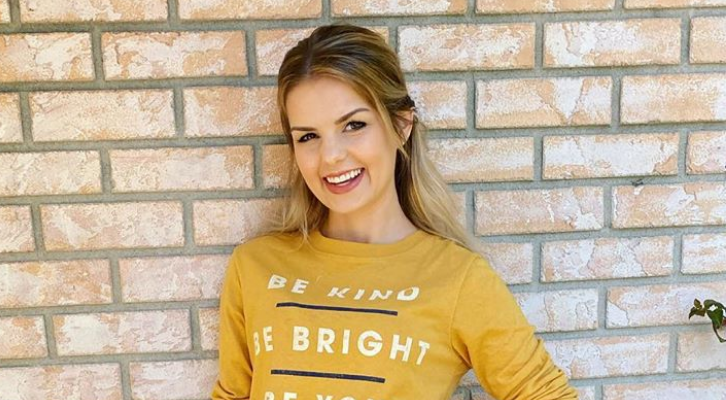 In a new YouTube video, Alyssa talks about finding out that she’s pregnant. Later, Alyssa reveals how she told John she’s expecting their fourth child.

She explains that she previously thought she was pregnant. But, the next month, she thought the test would be negative again, and it wasn’t. She talks about how she’s had baby fever pretty badly. Plus, their youngest daughter is 2 years old, so she and John feel ready to expand their family. She says that she got the positive pregnancy test on a Tuesday. She plans to tell John on the following Saturday, which is when the family celebrated Father’s Day.

In the YouTube video, Alyssa shows viewers the cards that the girls made for their dad. The girls excitedly announce that it’s Father’s Day. Then, Alyssa and the girls give their presents and cards to John.

One gift from the girls is a piece of handprint artwork. John appears to love the framed painting from the little ones.

Next, John pulls a small sign out of a gift bag. It reads, “No clue what to expect, but we’re expecting.” When John reads it, he smiles and starts hugging his wife. Alyssa gives John a pregnancy test too.

When the kids ask John what the pregnancy test is, he and Alyssa start explaining. Ultimately, they decide to wait to tell the kids, because they’re afraid they’ll tell everyone. So, John and Alyssa brush it off, and the kids don’t seem to mind. But, the couple says they’ll share the news with the kids soon enough. Alyssa says she thinks the older girls will understand the pregnancy better this time around.

John thinks that they’ll have a boy, but Alyssa thinks they’ll have another girl because they’ve only had girls. She says they’re prepared for a girl and she doesn’t know what she’d do if they had a boy. Plus, they have a long list of girl names, but they don’t have many boy names. John admits that he likes being “spoiled to death” by his daughters.

So, what do you think of John’s reaction? Share your thoughts below.

Brian Austin Green Agreed To Appear On ‘DWTS’ Under Certain Terms
Why Amelia Gray Hamlin Apologizes To Her Dad Harry
Netflix ‘Another Life’ Season 2: Release Date, Trailer, What We Know
Free Streamer Tubi Wants To Be Your October Halloween Scare Spot For TV
Scott Disick Is No Longer Keeping Up With Any Of The Kardashians