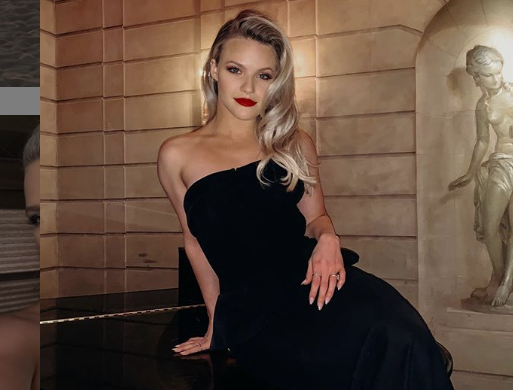 We all have our personal opinions, but have you ever wondered what the pros think of Dancing With The Stars contestants? Professional dancer Witney Carson gives her own take in an Us Weekly interview. The publication asked who she thought the best performer was. And Witney admitted she was a little biased.

“I would probably say Alfonso [Ribeiro]’s the best or probably Jordan Fisher,” Witney told Us Weekly. “I think Jordan Fisher is probably the best contestant, what you’ve seen on the show.”

“I texted Alfonso and I’m like, ‘You’re the new host, aren’t you? Tell me!’” Witney said in a different Us Weekly exclusive. “And he’s like, ‘It’s not me.’ So I definitely thought [of] Alfonso, for sure. Just because he’s so involved. He loves the show. He is so knowledgeable in dance, and in judging and hosting. So I just thought he’d be a perfect fit.”

We also think Alfonso Ribeiro would make a great host, but the execs chose Tyra Banks instead. Regarding the host change, Alfonso had this to say,

“I’ve texted back and forth with Tom. I would’ve never made that decision, obviously. I think Tom and Erin are the backbone of the show,” Alfonso told Us Weekly shortly after the announcement was made. “… But I think people like myself will absolutely miss Tom and Erin. It’ll be hard for me to see the show in whatever new form it is.”

And the Worst Contestants?

As far as the worst celebrity guests go, Witney was honest.

“I know Kim Kardashian was really rough,” she said. Witney continued that Master P also struggled quite a bit.

However, one of the celebrity contestants that surprised her the most was Frankie Muniz. Witney and Frankie came in 3rd place in Season 25.

“I didn’t know how good he [would] be,” Witney said. “I think he obviously didn’t have the natural ability and he’ll tell you that, but I think he was able to learn very quickly and we made it all the way to the finale. So, obviously, something we were doing was working, but he definitely surprised me.”

When Us Weekly asked Witney about her favorite performances, she immediately had an answer. Derek Hough and Bindi Irwin’s Season 21 performance really stuck out to her. The champion pair performed a contemporary piece dedicated to Bindi’s father, Steve Irwin.

“I don’t know if that’s the best in history, but that’s definitely something that, like, imprinted on me,” said Witney.

Do you agree or disagree with Witney’s picks? Let us know in the comments. Don’t forget Dancing With The Stars Season 29 will premiere sometime in September. Check back in with us to find out more.

Amy Roloff Is Excited About Her Wedding, But Is Chris Marek?
Wait, Is ‘Storage Wars’ Season 13 Over Already?!
Braunwyn Windham-Burke Betrayed By Andy Cohen For ‘RHOC’ Firing?!
‘RHOBH’ Fans React To ‘The Housewife & The Hustler’ Premiere
WOW!! Looks Like Whitney Way Thore Has Lost Some Major Pounds