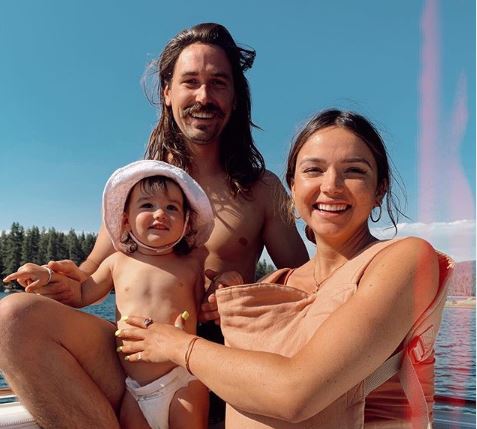 Bekah Martinez of The Bachelor just had her second child. She recently shared a video with fans that basically showed it all happen. US Weekly is revealing that she is now defending herself against the haters.

Bekah just had her son Franklin in June. She has always been open about doing things naturally. This birth was actually done at home and was a water birth. Bekah Martinez had the birth recorded and just recently shared it with fans.

If you want to see the video, it is about 13 minutes long and is on her Instagram page. It shows the entire birth to include her son coming out. Along with the video, she shared “It was ecstatic. I was literally laughing and joking between contractions and smiling through pushing.”

She had her first daughter at a birthing center, but this time around she did at home. Bekah Martinez actually caught her son as she pushed him out.

A direct quote from Franklin: “this lady is nice; she gives me free milk.” Happy one month, sunshine!

Bekah knew that people were going to give her a hard time about sharing it. She revealed saying, “I sat with this feeling for a while, and I came to a couple conclusions. I realized I still had so many negative, subconscious, deeply-embedded thoughts telling me that I wasn’t feminine enough; that I looked and sounded weird. I projected so many insecurities onto an experience that was truly one of the most powerful, magical moments of my life.” She went on to say, “This is a moment worth sharing; so in advance — f–k the haters.”

The comments on her post are a bit of everything. Some people aren’t happy with her and others loved it. Here is what a few people have to say.

The comments showing now seem to be pretty positive, so you have to wonder if she deleted some of them. It wasn’t easy for Bekah Martinez to post this and share with everyone, but she went for it.

Don’t miss watching The Bachelorette when it starts airing on ABC next month. It already sounds like a wild season you won’t want to miss. Clare Crawley started out as The Bachelorette and what happens next is going to be crazy.