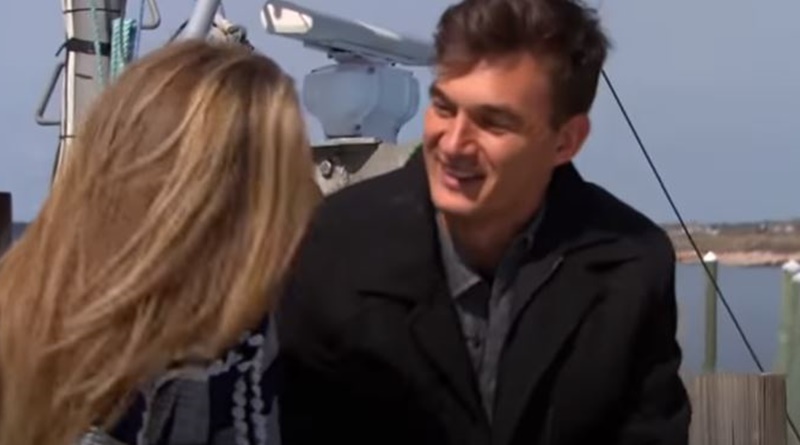 Bachelorette fans might recall that Hannah Brown commented to Tyler Cameron that he aways seems obsessed about touching his genitals. Back then, The ABC star just laughed and told her it’s his place where he “feels safe.” Well, demonstrating that in a set of videos and photos, fans also got an eyeful of him rearranging his “furniture.” And, he wore a speedo, leaving little to the imagination.

Bachelorette fans get a look at Tyler Cameron in his speedo

Tyler’s still very much in the focus of fans even though he hasn’t returned to the Bachelor franchise yet. Fans hoped for him as The Bachelor, but apparently, he turned it down. Still, maybe if Tyler gets his dream come true, they could see him on Dancing With the Stars one day, we reported. In fact, he’d love to take home that Mirror Ball Trophy.

The @everythingtylercameron account on Instagram shared some photos and videos of Tyler and his mates working out in the pool. Notably, the Bachelorette heartthrob wore his speedo. Actually, maybe for the first time in a long time, as his tan looked very uneven. The first photo showed him out the water, then came a few clips of the guys swimming. But, the third last clip got everyone’s attention. The last one got captioned with, “The only one wearing a speedo in our pool workout.”

Tyler unashamedly adjusts his ‘furniture’ in the clip

Fans loved that before Tyler put his towel around him, he adjusted his speedo contents. One fan noted, ‘You guys always do touch your gen…..hmm never mind 😁😂😂😂.” Another one said, “Tyler missed the speedo contest during the Bachelorette. I missed him there. Thanks for making that up to us Tyler. And the boy is always rearranging his furniture in full view.” Bottom line, one fan noted, “Tyler s-xy as hell.” As another admirer wrote, “He got caught again playing with his balls… not by the tabloids… lmao. That boy is HOT 🥵.”

Certainly, nobody minded Tyler wearing a speedo and adjusting his “furniture.” One fan commented, “omg I totally laughed! He is NOT shy!” Another one noted, “I cannot get over that speedo 👀🤗.” Then, a person wrote, “I mean the boy can rock a Speedo! 😏😂” But, a few people commented on how he really needs to tan while wearing his speedo. The whiteness showing where his usual costume fits looks rather startling. A Bachelorette fan wrote, ” Looks like he’s training for the Iron Man triathlon between his biking, swimming, and running. Love the speedo look, just needs to expand the tan line🤣.”

As you can see, the speedo post showing Tyler Cameron adjusting his furniture sure got a lot of fans smiling!