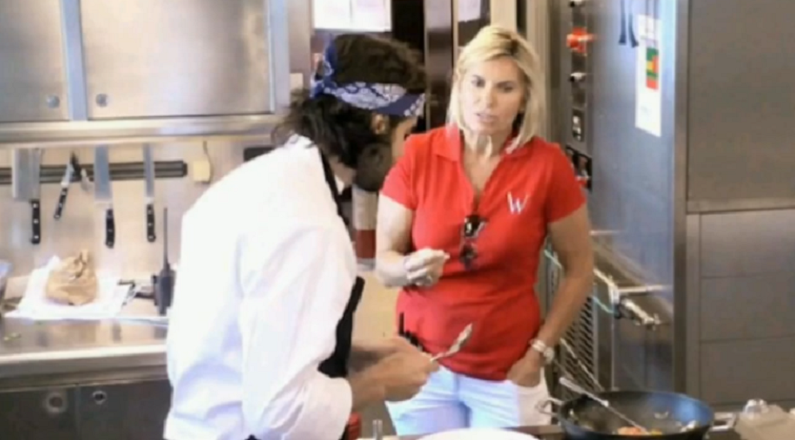 Below Deck Med star Captain Sandy Yawn received backlash for micromanaging her crew. She especially caught heat when she closely watched chef Hindrigo “Kiko” Lorran in the galley and criticized his meals.

The superyacht captain even asked the charter guests if the food was good after every meal. Fans did not like the way she handled the Brazilian chef.

Following Monday night’s episode, Sandy took to Twitter to claim that Kiko quit. She didn’t fire him as it appeared on the show. As if that wasn’t enough, Sandy accused Kiko of lying on his resume. Fans didn’t take well to Sandy’s comments. They accused her of lying about what really happened.

After Monday night’s heart-wrenching episode of Below Deck Mediterranean, Captain Sandy Yawn took to Twitter to explain the situation. She revealed to followers that she did not fire chef Kiko. According to her, he was the one who quit on the job.

“He quit,” the captain responded to a Below Deck Med fan.

One fan shared the tweet and included, “Oh, so now you claim Kiko quit? You made his life miserable on the boat precisely because you wanted to get rid of him. You lost credibility Sandy.”

Sandy also hinted that Kiko lied on his resume. In a follow-up tweet, she wrote, “They lie on their CVs.”

looks like sandy has been deleting her tweets where she called kiko a liar and also said he quit… #BelowDeckMed pic.twitter.com/8YafpwU03u

Below Deck Med fans were shocked over both of her tweets. The sea captain tried to defend her actions for firing Kiko. But it backfired against her. She has since deleted both tweets, but fans are spreading them on Twitter like wildfire.

The Below Deck Med boss made an appearance on Watch What Happens Live with Andy Cohen on Monday, August 3. Captain Sandy Yawn addressed the chef’s firing during the four-day charter. She explained that her decision was best for everyone on board of The Wellington, including the charter guests and the crew members.

“When someone says their main goal is to prove to themselves that they really want to make this work, it’s two-part,” Sandy explained. “He’s proving to himself that he can do this when he doesn’t clearly have the skill set. So, for me, that’s really selfish, because when you’re making it about you, and you’re going to tackle this, but don’t have the proper training, you’re affecting the whole.”

Kiko is an aspiring young chef. He made that clear at the start of Below Deck Med. So, it’s shocking that Sandy would claim that he lied on his resume. During her virtual appearance on WWHL, she said that even Kiko knew that he wasn’t ready to take on a superyacht.

“I wish Kiko would have come to me and said, ‘You know what, I’m in over my head. We need to get another chef.’ I would have loved that,” Captain Sandy said. “I gave him opportunity after opportunity.”

Meanwhile, Kiko revealed to The Daily Dish that he’s unsure if he would work for Sandy again. But he did call her “a great person.” He admits he has “nothing against her,” even if the fans don’t like her. “I totally respect her as a person and as a captain,” Kiko added. “[It] just didn’t work out.”

Kim Kardashian DRAGGED For Photoshop Fail In Skims Ad, Just A Glitch?
A Big Duggar Announcement Could Be Coming Soon – What Is It?
Why Does ‘sMothered’ Star Cher Look So Familiar?
‘GH’: Kirsten Storms Fears Backlash After Shaving Head For Brain Surgery
Bekah Martinez Shares Her Heart-Stopping Moment With The Kids