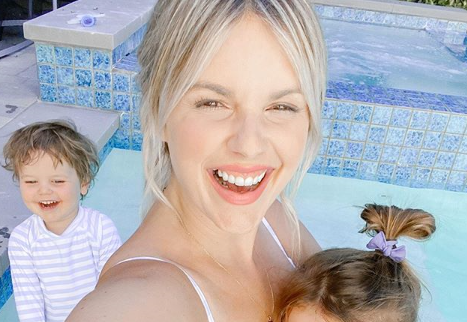 The Bachelor: The Greatest Seasons Ever! just revisited Ali Fedotowsky’s run as the Bachelorette. In the seventh episode of the show, fans got to relive when Roberto Martinez won her heart. However, had another contestant not made a decision to leave, Fedotowsky might have ended up with a whole different life.

In a recent interview, Ali said she could still be with Frank Neuschaefer if he’d stayed. She said, “my guess, because obviously I can’t go back in time, is I would have picked Frank in the end. If he had stayed, for sure, I would have.” She went on to say that he reminded her of her husband, Kevin Manno. Ali said when she described to the producers what she wanted in a husband, she described her current squeeze. Fedowsky married Manno after splitting with Martinez.

What do you think about these glasses on me…yay 👍🏻 or nay 👎🏻? I’m into it 😉 #fabfitfunpartner ❤️ They block blue light and I got them in my Fall #FabFitFun box! Have you heard of them? And seriously if you haven’t signed up to get the @fabfitfun box yet, what are you waiting for?!?! It legit feels like my birthday 4 times a year every time my box comes. Use my code ALIFED for $10 off your first box. It’s normally $49.99 (which in itself is an insane deal) but with my code ALIFED you get $10 off your first box at www.fabfitfun.com – so you get 8 full-size products worth over $200 for $39.99. In my Fall box I got these Nectar glasses which retail for $45 alone, the SOIA & KYO “scarfigan” that retails at $85 (can you spot molly in the pic 😂), the Voesh New York pumpkin spice pedicure kit (perfect for my little manicurist) and everything else in pic 4! Seriously I do not know how they can afford to put all of this in a box that’s less than $40 🤷🏼‍♀️ But I’ll take it!!!! 😊 P.S. A fun thing about blue like blocking glasses is that you can wear them even if you don’t need a prescription. And I think glasses are so cuuuuute to wear! Tag a friend that you think would look good in these glasses! 👓 And use my code ALIFED to get this box ASAP!!!! #budgetfriendly #affordableFinds #glasses #mommyandmeday #mommyanddaughter #bluelightblockingglasses

Ali Fedotowsky Said It’s Not All Black And White

While Ali Fedotowsky said she would have gone with Frank, she admits she still isn’t a hundred percent sure. She said, “maybe because things with Roberto and I that last date were so magical, maybe, I would have changed my mind. She said either way she would have struggled to take two people to the end.

According to US Weekly she reconnected with Frank after she split with Martinez in 2011. This is something she hadn’t revealed until recently.  Neuschaefer left the show because he had feelings with someone else. The second time they tried it, it didn’t work again. Frank Neuschaefer married Jenn Carr in 2019 and she enjoyed watching the rerun of Fedowsky’s season. She said, “there’s nothing better than watching your husband get slapped by another woman.” Carr also thanks Chris Lambton, the runner up, for encouraging the slap. She said she couldn’t wait to watch more.

The Former Bachelorette Is Happy With Her Life Now

Ali Fedotowsky is living her best life and happily married to Manno. They have two children together, a son Riley who is two and a daughter Molly who is four.

Ali is one Bachelorette who doesn’t mind re-watching her season. She posted on Instagram, “I never felt worthy enough to be the Bachelorette. I remember going through the process thinking that at any moment the producers were going to realize they made a huge mistake and replace me with someone prettier or more desirable. So when the show reached out to me recently and told me that my season was going to air as one of the GOAT – all the those feelings came flooding back. Why me?” She went on to say she’s thankful it was her and thanks to the guys that were a part of it.

Fans can continue to watch recaps of their favorites on Monday nights.

‘MasterChef: Legends’: Who Is Curtis Stone?
Kendra Caldwell’s Father Shuns Homosexuality As Fakery: ‘No Such Thing’
Elizabeth Gillies Brings Cleavage Out Of Retirement In Steamy Snap
Which Duggar Courtships Seem To Be In The Works?
Adam Busby’s Birthday Wish Granted: Finally Gets His Hummer