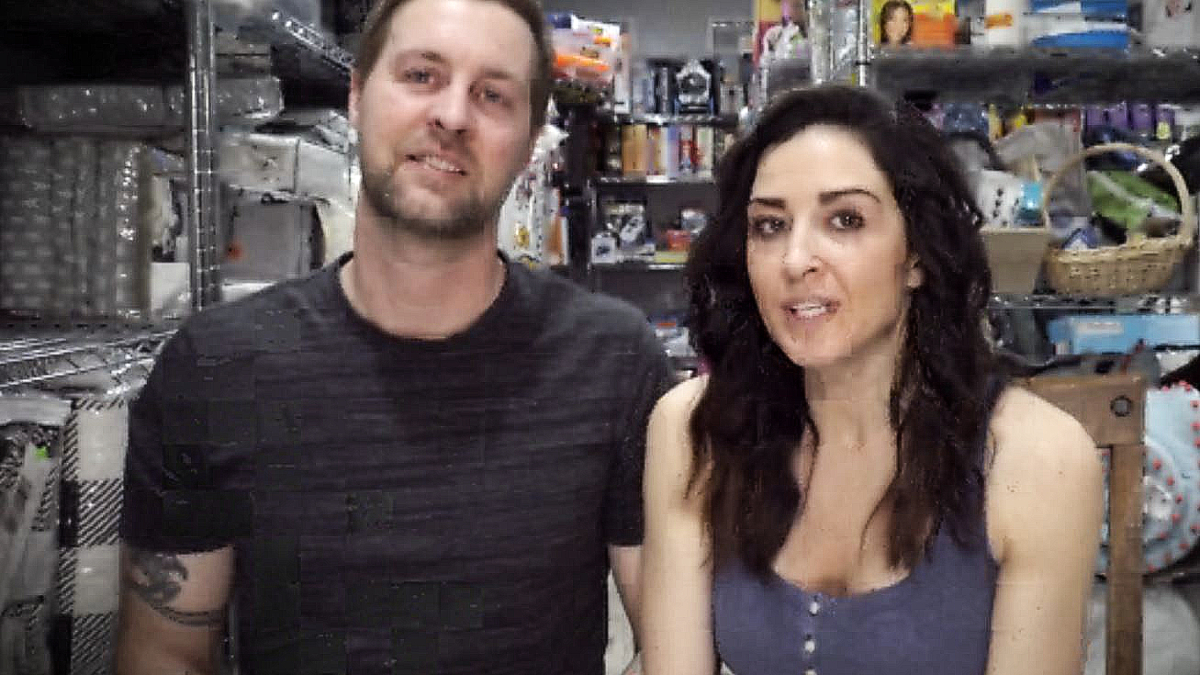 Tonight on A&E, retail junkies and bargain hunters will have a field day as Extreme Unboxing debuts, and two of the best sellers spoke to TV Shows Ace sharing how they make their money.

Salena and Bobby are parents of two kids who had regular jobs, until the economy went COVID crazy.

Now, these two are savvy resellers who bid on unseen lots guessing as to what they can resell, bid, receive, unbox and start having some fun and profits.

Now viewers can see how they do it and the first two episodes of this series will premiere back-to-back on August 4 at 10pm, following What’s it Worth? with Jeff Foxworthy.

Who are Extreme Boxing stars Bobby and Salena?

Hailing from Rochester, New York, parents Bobby and Salena are resellers who also have a bricks and mortar storefront to sell their items.

Their business is Goods Galore and they sell a ton of family centric items.

Bobby and Salena focus on selling merchandise they can move easily in their shop–mostly home goods–but that doesn’t stop them from taking chances on huge shipments of bicycles, food items or fashion clothing.

Bobby and Salena have two young children and live for the chaos that comes with running their own business while providing their community with a good deal and making money doing it.

Although they’ve only been in the reselling game for a short time, Bobby and Salena are raking it in.

A&E’s Extreme Unboxing follows a group of big personalities from across the country as they buy liquidated merchandise for a fraction of its original retail cost, and then unbox it with hopes for good things to resell and make a buck.

They spend their own money to bid on and win the best boxes at the best prices, but these are unseen pallets which are delivered to their homes for the big reveal. Not every reveal is a homerun. Liquidation.com, DirectLiquidation and Bulq.com are some of the bigger resellers.

Each group digs through hundreds, sometimes thousands, of items on the hunt for retail gems to resell.

Whether it is one box or an entire truckload, these savvy super-flippers scour the Internet searching for their next big score. With items ranging from everyday store stock to the odd finds and wacky items, this modern-day treasure hunt is filled with surprises as no one, including the buyers themselves, have any idea what will be inside.

TV Shows Ace spoke to Bobby and Salena ahead of tonight’s premiere:

How did the producers find you?

Bobby: I’ve bet I got like three or four emails from them.  I thought they were fake…but they kept emailing me. So after a while, I was like, alright fine.

I didn’t even tell Salena that I was getting them. Then I finally told her, and when I told her she literally jumped inside my throat and out my toes. That’s where we are now.

Your store, you have a bricks and mortar business called Goods Galore in Rochester, New York. How long have you had it?

Bobby:  Two years. We started our first store. And now we’re in our third location. About two years.  We just went and looked at some retail spaces and every space we’ve been in we’ve outgrown within months.

What do you avoid and what do you love to stock in your store?

Salena: We avoid clothes and food. We don’t do that. We go after for everything else. We were kind of like a general merchandise. We have almost everything, all the major retailers have. So we have our bedding, our kitchen furniture, furniture toys, and some miscellaneous small core things like that.

Do you ever go to thrift stores or consignment places?

Salena: No, we get a lot more money for items that are brand new and box or anything in a box.

What are your best sellers currently in the last year, especially with COVID, what are you selling the most of, and that you’ve looked for mostly?

Salena: Since COVID it has been a lot of workout equipment, outdoor pools and grills and furniture, anything for outdoors. Things we know that have been pretty much sold out in stores since COVID hit, like trampolines. Anything kid-friendly and also for outside which has also has been sold out in stores. So when we get that, it’s huge for us.

Bobby:  Yes. I’ve noticed in our store we sold out really fast of all of our puzzles, it’s the weirdest thing in the world, but COVID is keeping people together, their families, and they’re trying to find ways to occupy their minds and their families and the puzzles flew. I can’t keep puzzles and things for in the backyard.

This is sort of like a big picture question. I’ve noticed how retail has the nature of retail stores and how we grew up with malls and stores and retail places to go buy things, but they’re shrinking because of Amazon. Have you felt this shift?

Salena: Absolutely more online now. Everything is coming definitely an online business, right? We have a huge online following as well as our stores, but we have picked up tremendously and online sales were big.

Bobby: COVID opened our eyes to see what type of presence we actually had online with our store. We have a group on Facebook, specifically designed for our store and we post on that all day long. And our group just, it blew up during COVID and we noticed how fast and active our group is.

Interesting. Now, shipping is tough, especially for the big items, do you set it up? How do you have to ship things or do people come to pick things up from you?

Salena: We don’t typically ship. The beauty of having a store is our customers are local. So when they claim something online, they have a 24 hour timeframe to 48 hours to come and pick up the items. The only time we ship is when we turn to eBay, but we’re not really big on those sites

Bobby: And we’re working our way. There, that’s another avenue we’re going to open up to after we seen the presence we had on the Facebook group that we have. So we’re going to look more into shipping…. and when it comes to shipping, it is what it is. It’s something I got to look into and the cost is definitely going to be more

What’s the production like? Because of COVID, you guys are pretty much filming yourself, but is there any support you have anyone from the production company that sort of sets you up?

Bobby: We, we filmed all of this before COVID actually hit.

Salena: Yes we filmed in September, October and November of last year. So we were completely done before it all hit.

Bobby: Yeah. We’ve been doing a few a self shots here and there with the producers Facetiming us and directing us what they were looking for during COVID, but for the majority of the filming, everything was done before COVID even hit. I’m very lucky.

How do you know where to buy? Where do you guys go to buy these huge pallets of things?

Bobby: Basically the show is going to outline a lot of that for us. There’s a bunch of websites out there that give you options for bidding on pallets. If you want to buy just one pallet a couple of sites, break it down to what the pallet is, what category say, kitchen, bedding, toys, things like that. Um, they all break it down and you can bid online through this stuff.

Who are these people they’re selling these pallets? Is it overseas retail?

Bobby: No, It’s all local. It’s all your local, big retailers. So all returns that either somebody didn’t like it, they used it, it broke, it couldn’t get delivered to their house. The box was damaged. What happens? There’s a number of reasons why people return

Salena: There  are companies out there that are spending billions of dollars, buying all these overstocks departments from all these big retailers, and then they put it up on their websites,

So you kind of squeeze in there between the Big Lots and Overstock.com. Is that correct?

Bobby: Yes, that’s correct me It took me probably over a year to really get my connections and refine how to buy and where to buy from.  So that way I know what I’m getting. I still don’t know the condition of these items…but I just have a better relationship that I can get a little bit better product then going in blind.

Why do you avoid the food sector?

Salena: Expired! A lot of the time food is expired and it’s not been profitable. Yes.

Bobby: It’s not what we do. It’s not what we go after. It never really appealed to us. We didn’t want to be more like a Dollar General-type store we wanted to be in between like the Big Lots and Target. We wanted to sell the stuff that we know people really look for.

Do you employ people or are you guys running the show?

Bobby: It’s us, we’re running it! Lot of my family comes and helps as well.

Salena: We have some friends that come in on the weekends and help us price and organize.

Can people come off the street and come into your store?

Do you recommend this for people who are maybe caught in the short hair is from this COVID and are out of a job or, or their, their career has been basically COVID canceled out?

Bobby: If they have the disposable income and willpower and grit to do it, then by all means, go for it. The best thing about this business is there’s really not a lot of competition because we all get different items.

Salena: Anybody can do it. It doesn’t take a lot of money to buy it, to start small. And then you can just sell out of your house. if that’s your thing, you can take your local garage sale sites, Facebook marketplace. There’s so many avenues you can sell,