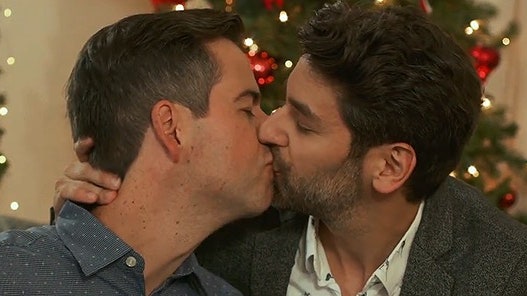 Get ready, Lifetime fans. The network recently announced it has plans to include LGBTQ inclusive movies to his holiday line up this year.

Last year, Twinkle All the Way featured a same-gender kiss between actors Brian Sills and Mark Ghanimé. However, this year Lifetime plans to create an entire film with a focus on an LGBTQ romance. The Christmas Set-Up will be the first of its kind for the network.

We still have a few months left until Christmas, but until then you can catch plenty of other exciting movies on Lifetime. They’re always announcing new plans on their Instagram page.

✨Summer may be coming to an end but Lifetime’s new projects never do! We are so excited to announce so many new and amazing projects!✨ ✨ #RobinRobertsPresents: #TheMahaliaJacksonStory starring Danielle Brooks✨ ✨#MarriedAtFirstSight: #Unmatchables✨ ✨#ItsAWonderfulLifetime is proving that Christmas is for everyone! We will feature 30 new movies including new titles #SugarandSpiceHoliday, which is Lifetime's first holiday movie centered around a Chinese-American family and #TheChristmasSetUp, the network's first movie with a LGBTQ romance as the lead story! We are welcoming Tiffany Haddish as an Executive Producer on the movie #ChristmasUnwrapped. We are excited to announce Ali Stroker in #ChristmasEverAfter and Jason Priestley in #DearChristmas! ✨

An Inside Scoop on the New LGBTQ Lifetime Movie

The official synopsis for The Christmas Set-Up is as follows:

“Hugo, a New York corporate lawyer and his best friend Madelyn head to Milwaukee to spend the holidays with his mom Kate, who is also in charge of the local Christmas celebrations. Ever the matchmaker, Kate arranges for Hugo to run into Patrick, Hugo’s high school friend and secret crush, who has recently returned after a successful stint in Silicon Valley. As they enjoy the local holiday festivities together, Hugo and Patrick’s attraction to each other is undeniable and it looks as though Kate’s well-intentioned Santa-style matchmaking is a success. But as Hugo receives word of a big promotion requiring a move to London, he must decide what is most important to him.”

Doesn’t it sound cute? We’re ready to put our cozy Christmas pajamas on and settle down with this sweet film. We’ll all have to wait a little longer though. Lifetime has only just begun casting. If everything goes according to plan, production will start sometime this month. The network really needs some positive press after its newest show, Happily Ever Altered, was bashed by critics.

“We are thrilled to continue our legacy of creating a holiday destination that is welcoming to all at Lifetime,” says network representative Amy Winter. “With more new movies than any one cable network for streamer, I couldn’t be prouder of the incredible talent joining us in front of, and behind the camera, on these new holiday movies.”

It’s definitely refreshing that we’ll be seeing some new, inclusive movies this season. Hallmark is famous for its Christmas movies, but so far hasn’t unveiled any plans for an LGBTQ film.

However, a Hallmark representative recently told Newsweek, “Diversity and inclusion is a top priority for us and we look forward to making some exciting programming announcements in the coming months, including announcements about projects featuring LGBTQ storylines, characters, and actors. We are committed to creating a Hallmark experience where everyone feels welcome.”

Perhaps we could see a more inclusive Hallmark movie down the line. We certainly hope so!

Are you excited about the new Lifetime film? Check back with us for all the latest news on The Christmas Set-Up. We just really hope the pandemic doesn’t mess up filming and production schedules. Many other shows are on hold indefinitely with no word on when production can resume. If everything goes according to plan, we will hopefully see this film on time. We’re really in for a special treat this Christmas season!