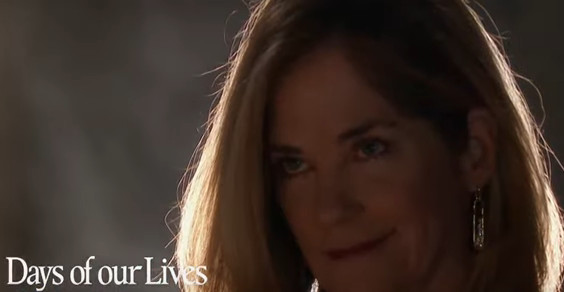 Days of Our Lives kicks off a hot summer month with even hotter storylines. Ben’s (Robert Scott Wilson) captor is finally revealed, as is her dastardly plan. Meanwhile, Allie (Lindsay Arnold) decides who will be adopting her newborn son.

Ben and Ciara (Victoria Konefal) did not have any easy trip to the altar. Someone was plotting to spoil the wedding, framing Claire (Olivia Rose Keegan) as the culprit. Once Ben went missing after the wedding, Claire was no longer under suspicion. This led viewers to speculate about Ben’s captor.

As Claire and Ciara team up to find Ben, Chloe (Nadia Bjorlin) returns to DOOL with some clues. With Chloe’s help, they realize that Ben’s captor is Eve Donovan! Online chatter had this one right, as Kassie DePaiva’s return was not a surprise.

Eve’s master plan may be a surprise, though. Using shock treatments and drugs, Eve brainwashes Ben to kill Ciara. However, Ciara thinks her love can overcome the brainwashing and the couple returns to Salem. Will Eve get her revenge after all?

Speaking of revenge, Allie is not happy with her family this week on DOOL. She discovers that Will (Chandler Massey) was in cahoots with Sami (Alison Sweeney) about who will adopt her baby. As fans know, Allie chose Rafe, but thanks to Sami’s urging, he said no.

Allie then went with her second choice, Will and Sonny (Freddie Smith.) Until she finds out about Will’s involvement in Rafe saying no. Allie calls off the adoption. Unsure what to do, she takes Nicole’s (Arianne Zucker) advice and visits her baby. Spoilers indicate Allie may find herself bonding with her son and raise him herself.

WilSon fans were livid earlier this year after news broke that Chandler Massey (Will) and Freddie Smith (Sonny) were let go from DOOL. Freddie Smith recently took to his YouTube channel to thank fans and share his final air date.

Sonny and Will leave town on September 1. Coincidentally, that is also the target date for Days of Our Lives to resume filming. Without several stars. Kristian Alfonso (Hope,) Victoria Konefal (Ciara,) and Galen Gerig (Rafe) are just a few of the actors leaving DOOL. Due to the COVID-19 crisis shutting down production in March, fans won’t get farewell scenes from the departing stars.

Online rumors say that more stars are on their way out of the NBC sudser. Check back with us for updates. Days of Our Lives airs weekdays on NBC.