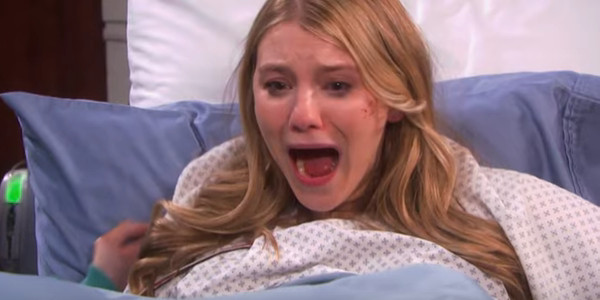 Days of Our Lives has a lot of behind-the-scenes drama going on with several actors announcing their departures. However, for now fans can still see them on-screen for the next few months, at least.

If you missed the big news, Greg Vaughan (Eric,) Victoria Konefal (Ciara,) and Kristian Alfonso (Hope) are all leaving DOOL later this year.

The on-screen drama going down this week is enough for fans to forget the rumblings anyway. As we say goodbye to July, we’re also saying goodbye to DOOL’s ‘4 weddings in July.’ However, the fall-out from those weddings is still playing out in Salem.

Allie (Lindsay Arnold) was taken to the hospital last week on DOOL after the explosion at Ben (Robert Scott Wilson) and Ciara’s (Victoria Konefal) wedding. However, she didn’t go into labor just yet. Instead, she goes home and gets into a heated argument with Sami (Alison Sweeney.)

Spoilers indicate that Allie goes into labor due to the argument. But it seems Sami is not welcome in the delivery room with Allie. Instead, Allie asks her newfound friend, and Sami’s nemesis, Nicole (Arianne Zucker.) Eric and Nicole return to town from their honeymoon in the nick of time to be there for Allie.

How will Sami react to her daughter giving birth with her rival in the room?

DOOL fans online are speculating about the father of Allie’s baby. Some theories include Theo or even Tripp.

Will and Sonny Prepare to Adopt Allie’s Baby

As DOOL viewers know, Allie made the decision to give her baby up for adoption. She originally wanted Rafe (Galen Gerig) to adopt the baby, but Sami quickly put an end to that. Unbeknownst to Allie.

Since Rafe turned her down, Allie picks Will (Chandler Massey) and Sonny (Freddie Smith) to adopt her child. The couple get word of Allie’s labor and prepare for the bundle of joy.

But one thing may stand in their way – Nicole. She finds out about Sami’s interference with Rafe. It seems that Will was in on it, too. When Allie finds out, she may change her mind about letting her brother adopt her baby.

The hunt is on in Salem find the person who set the bomb at Ben and Ciara’s wedding. DOOL‘s Rafe interrogates Claire (Olivia Rose Keegan,) who continues to profess her innocence.

Meanwhile, Ciara visits Ben’s dad, Clyde (James Read,) in prison. While he may be locked up, Ciara knows he has people on the outside to do this dirty work for him. However that turns out to be a dead-end, too.

Ciara considers a new theory while Ben comes face-to-face with his kidnapper. Spoilers don’t say who is holding Ben hostage yet, but online chatter strongly points to none other than Eve Donovan (Kassie DePaiva.)

Tell us in the comments if you think Eve would go so far as to set off a bomb at the wedding. Any guesses on the identity of the father of Allie’s baby?

Jill Dillard Defends Amid Backlash For Feeding Dog Old Breastmilk
‘Bachelorette’ Fans Wonder What The Heck A ‘Skin Salesman’ Does
Teen Mom 2 Drama: Briana DeJesus Calls Out Two Cast Members For Being Fake
TLC Makes A Decision – ‘MBFFL’ Renewed Or Canceled?
Another Duggar Might Already Be Engaged & It’s Not Jana!