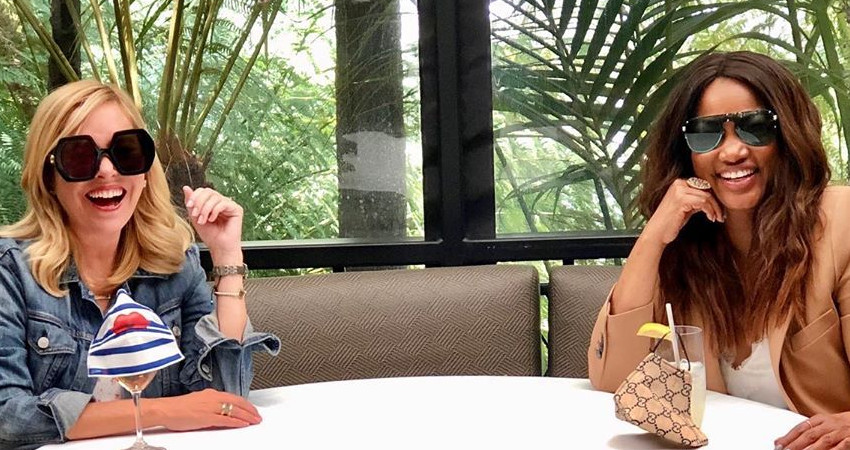 Uninvited! The Real Housewives of Beverly Hills cast gathered in an “impromptu” get-together after the virtual Season 10 reunion. Well, some of them. Sutton Strack and Garcelle Beauvais revealed during an appearance on Watch What Happens Live that they didn’t get an invite. Denise Richards, presumably also did not get an invitation.

From what we’ve heard so far, the RHOBH Season 10 reunion was tense, even held virtually. Teddi Mellencamp said afterward that the reunion took 13 hours to film. Garcelle has said several times that it took her a couple of days to shake off the reunion drama. In fact, it’s widely reported that she immediately unfollowed Lisa Rinna after filming the reunion.

Despite the tense reunion, RHOBH stars Dorit Kemsley and Erika Jayne partied with Lisa and Teddi soon after. During a recent appearance on WWHL, Garcelle called them out as “mean” for not inviting the newbies, Reality Blurb reports. Watch Garcelle and Sutton talk with Andy Cohen about the perceived diss.

Lisa Rinna Claps Back, Says She ‘Didn’t Get an Invite’ For Years

Not so fast, says Lisa Rinna. She took to her Instagram Stories to explain why the two weren’t invited. According to Lisa, RHOBH newbies don’t get invites to the after-party. She reveals that she didn’t get an invitation until after her “5th season.”

However, her post actually debunks the assertion that the post-reunion party was “impromptu.” If what she said is true, the party is a tradition dating back several seasons.

In her post, Lisa also alludes to the “bunny” that she tried to give Kim Richards during Season 7. Lisa also recounts her own story about difficult reunions. The DOOL alum says that she was “in a fetal position on the floor” after one reunion.

Sutton and Garcelle both said they were NOT invited by Fox Force Five (Kyle, Teddi, Lisa, Erika, Dorit) to a post-#RHOBHReunion party. #RHOBH

Lisa had a message for them: pic.twitter.com/M4Ul74WViB

Lisa isn’t the only one taking a defensive position about the reunion party slight. Kyle Richards also took to her Instagram Stories to explain why Garcelle wasn’t invited. She broke her reasoning into three points. The first point Kyle makes is that a post-reunion party has never been attended by the entire cast. Rather, the stars “split off into groups” depending on who is still on good terms.

Furthermore, Kyle says that Garcelle has been clear about her dislike of her. Therefore, why would Garcelle want an invite? Garcelle has spoken out several times since Season 10 began airing about not getting along with Kyle.

Kyle is clapping back at Garcelle and Sutton for not being invited to her home after filming the #RHOBHReunion 🥶 #RHOBH pic.twitter.com/JgpY8rzAiI

Kyle’s last point indicates that A LOT of drama went down during the reunion. She says that part of the reason the entire cast wasn’t at the party is because of what “went down.” at the reunion.

While former RHOBH star Brandi Glanville is at the center of the Season 10 drama, she did not attend the reunion. Instead, she will speak to Andy Cohen one-on-one at some point about her allegations of an affair with Denise Richards.

That means that whatever drama “went down” at the reunion, it was between Denise and the other RHOBH ladies.

It will be a few weeks until the reunion airs. There are still a handful of episodes left in Season 10. The Real Housewives of Beverly Hills airs Wednesdays on Bravo.